The day started fun! With an entertaining Hawkeye fan film, based on Matt Fraction’s take on the Avenger. I would love something like this for a Netflix series. My only complain? Clint Barton Hawkeye is too young and Kate Bishop Hawkeye is too young. The look about the same age in the film when there’s a larger age difference in the comicbooks. That said, it is adorable, and even Lucky the Pizza Dog is there!

The Guardian usually loves Tom Hiddleston, and Loki, and here’s a new article that confirms this notion: Why Tom Hiddleston’s Loki could be Marvel’s next great supervillain movie. And the make a compelling case. Then again, I am not unbiased~

Deadpool just proved that nasty boys are all the rage, while the huge hype surrounding Warner/DC’s Suicide Squad, five months before the film gets anywhere near multiplexes, suggests audiences are more than ready for heroes who are twisted, soulless psychopaths – providing they’ve got decent one-liners and a barrel full of punk attitude. Hiddleston’s Loki is probably the only villain in the Marvel universe with the bad boy chops to compete with Harley Quinn et al.

It’s well know that most big budget movies have some reshoot, that’s nothing to worry about. What’s a bit worrying about Suicide Squad is that Warner Brothers has decided to spend “tens of millions of dollars” to shoot additional scenes which will supposedly make the movie “funnier”. Apparently, all the jokes were in the trailer. Don’t know if they want to replicate Deadpool or it’s because the critics of BVS‘ doom and gloom tone. Oh well, I just hope they know what they are doing, since that’s the DC film I was most interested about. I really don’t need the movie to be funnier, I need it to be fantastic!

Maisie Williams (Game of Thrones) and Anya Taylor-Joy (The Witch) may be joining the X-Men universe, for the movie The New Mutants. OMG, finally! Maisie will play Wolfsbane, also known as Rahne Sinclair. and Taylor-Joy will be Magik, also known as Illya Rasputin.

Star Wars Rebels season 2 finale came and went, and we had some questions! “Twilight of the Apprentice” had a premiere though, and Star Wars Rebels executive producers Dave Filoni and Simon Kinberg answered questions after the screening. Like, is Ahsoka Tano still alive? Is Ezra being pulled to the Dark Side? Did Ahsoka know Anakin Skywalker is Darth Vader? Check out the long answers here.

Talking about Ahsoka, girl is getting a novel! It will be written by E.K. Johnston and will be available on October 11, 2016!

Fans have long wondered what happened to Ahsoka after she left the Jedi Order near the end of the Clone Wars, and before she re-appeared as the mysterious Rebel operative Fulcrum in Rebels. Finally, her story will begin to be told. Following her experiences with the Jedi and the devastation of Order 66, Ahsoka is unsure she can be part of a larger whole ever again. But her desire to fight the evils of the Empire and protect those who need it will lead her right to Bail Organa, and the Rebel Alliance….

Tom Hiddleston won best actor for High-Rise at the British National Film Awards, which are like the people’s-choice version of the BAFTAs. John Boyega won best breakthrough performance in a film for Star Wars: The Force Awakens. Taron Egerton, star of Kingsman: The Secret Service and Eddie the Eagle, won the best newcomer prize. Samuel L. Jackson won best supporting actor for Kingsman: The Secret Service.

Here are some set photos of Gal Gadot and Chris Pine in Wonder Woman, in what seems the first encounter between Diana and Steve Trevor. Other set pics show World War I soldiers taking aim at a group of Amazons on horseback. Also, there’s Robin Wright as Diana’s aunt General Antiope. 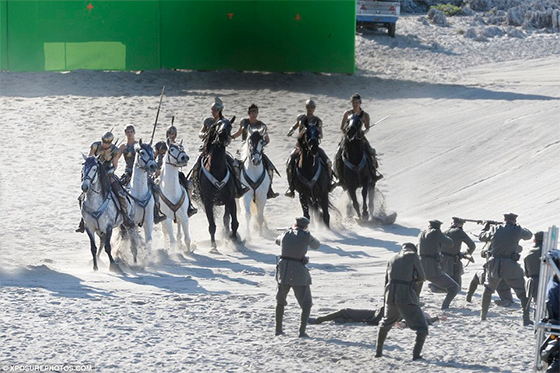 –
And that’s it for the week. Before I go, I want to wish Happy Birthday to Keira Knightley, Nathan Fillion, Quentin Tarantino, Nick Frost, Lucy Lawless, Marina Sirtis, Christopher Walken and Ewan McGregor. 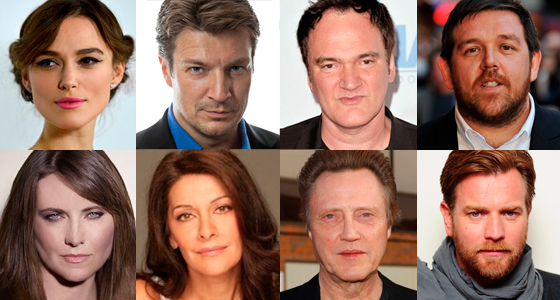