On your scheduled BVS news of the day, the film keeps breaking box office records! The film just beat The Hunger Games for best ever March Monday with $15.05 to $10.8M.

I’m sure Jennifer Lawrence ain’t losing sleep over that. Girl is busy hustling to remain in X-Men movies. Yep, despite saying how much she dislikes the blue makeup (don’t worry gal, we hate it too), and hinting that she was ready to move on from the franchise. But naw, she now says she’s “dying to come back”, and that she loves the movies and being in them. She also loves “ensemble movies because it’s not on anyone’s shoulders”. Guess, girl wants the steady money, even if we are yet to know if she’ll remain even if she wants too. Bryan Singer said that X-Men: Apocalypse marks the end of a prequel trilogy and number of key actors’ contracts (including Michael Fassbender, James McAvoy and Nicholas Hoult) are expiring.

Welp, one of my favourite manga is getting a live action movie. Fullmetal Alchemist will be filmed in Italy from June through August 2016, and the movie should be ready in 2017. As much as I love Hiromu Arakawa’s beloved manga, I’ve been disappointed many times by live actions of manga & anime. Not every adaptation can be Rurouni Kenshin.

Yes! Cartoon Network renews Steven Universe for 2 more seasons! Also, the show will continue its third season with “Summer of Steven,” airing from June through August. We will finally see what’s with these two awesome clips they released:

Back to BVS, it made $500 million in record time! Yep, half a billion already! Everyone, included China, went to watch the film! The public sure didn’t care about the mediocre reviews, at least not for the first week!

So yep, Ben Affleck has totally written his own Batman script. Guess those reports from Comic-Con that he was working on a solo project with DC Entertainment chief creative officer Geoff Johns were accurate. Or so his agency’s CEOs claims~

He’s contracted to do at least Justice League One and Two, so at least three times wearing the cape, There’s a script that he’s written that is a really cool [Batman] idea, so that’s out there as an option.

Noted comicbook write Grant Morrison had interview with Comic Book Resources, about the new graphic novel called Wonder Woman: Earth On, slated for release on April 6. It’s an update to Wonder Woman’s origin, as well as her relationship with her mother Hippolyta, and her usual love interest Steve Trevor… who has been race-bended! 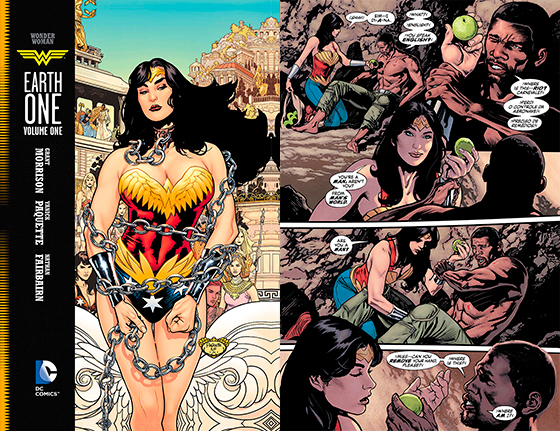 Steve Trevor was always sort of this boring, blonde, blue-eyed dude and that just didn’t cut it in the modern world. I wanted some diversity. But I also thought that was a much more potent idea to have Steve Trevor as a Black man. It’s much more powerful in the context of everything that Marston was doing and everything that Wonder Woman is about.