Greetings, fellow geeks. This week has been abuzz with much news (including much Prometheus related news); so much that my week started earlier than usual…

Chris Hemsworth is officially a “papacito“. His wife Elsa Pataky gave birth to baby girl India Rose! She will enjoy her first Mother’s Day! No, wait… the baby was born in London and Mother’s Day there was like two months ago. Oh well, baby still won a nationality jackpot, what with being born in UK with an Australian dad and a Spanish mom. Yay!

And now news that made me… not sad, but melancholic: Karen Gillan said goodbye to Doctor Who on behalf of the Ponds. Arthur Darvill, who plays her husband, tweeted back a sorta goodbye to the series too. I liked them both as a team, and how they interacted with Matt Smith’s doctor. Let’s see if this new companion girl works. 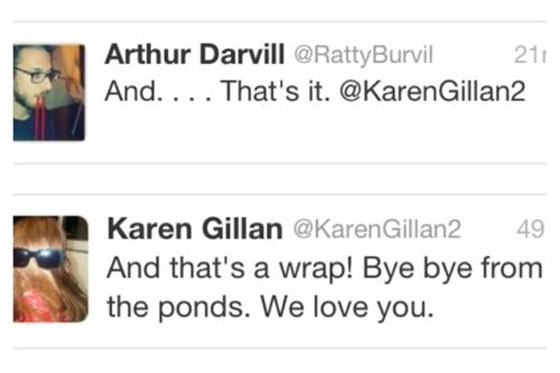 But the melancholy wouldn’t last. Tumblr to the rescue! Here’s a complitation of all the times Hiddles has sung (and has had a recording device near him).

It’s record-breaking time! The Avengers reaches $1 billion worldwide and the fandom rejoices! Makes me feel a bit bad for Dark Shadows though, but it was a terrible idea to open so close to The Avengers.

But it all ended on a bad note. CSI: Miami gets cancelled. Although this is the one CSI I was less fond of, it makes me sad because CSI: Miami was so memetic. So, in its honor, let’s enjoy David Caruso’s one liners.