Close encounters of the Hiddles kind [1]! Including pictures and video! He was, as usual, all smiles and hugs, and even the media got to take pictures of it.

Talking about Hiddles, excuse me,  occasional Norse god Tom Hiddleston, he will be on the British Fashion Council menswear committee in January.

Apparently, Tom Hardy will fight the heavyweight boxer David Haye. The boxer was impressed by Hardy’s shape as Bane, and wanted to take him on. Tom agreed on the condition any money raised goes to Help for Heroes, the Prince’s Trust, Breakthrough Breast Cancer, Bowel Cancer Research and homeless charity FLACK.

Hardy v Hayemaker? No problem. Let me take my make-up off first.

I am worried about Tom Hardy’s face though. We need it for reasons!

It will be available in a Blu-ray Combo Pack & DVD and download on September 25th. I want it!

Also, congrats on Danny Boyle for being the first winner at the Olympics! His movies, specially Trainspotting, saw a huge increase in DVD sales on Amazon!

Talking about the Olympics? What competitions will some Brit stars watch? Well, I mostly care about the opinions of Moffat’s boys: Benedict Cumberbatch and Matt Smith~

Trailers of movies of awesome men kicking ass! Taken 2 proves that even if Liam Neeson is pushing sixty, he can f*ck sh*t up if you mess with his family! And yay, the women don’t seem useless even if they are, appropriately, scared.

Skyfall looks quite exciting and yay for more half-naked Daniel Craig. Javier Bardem looks weird as a blond though; but considering he’s a Bond villain, that’s fine. And then, there was Ben Whishaw: 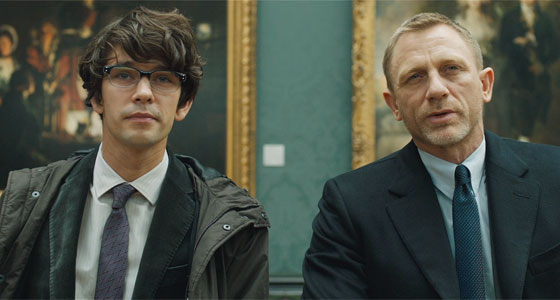