The Fangirly Diary of a Geek Girl: Here come my TV favs!

Greetings, my fellow geeks! This week we have had some previews and BTS videos about the series are waiting most for: Vikings, Game of Thrones and Hannibal. And of course, there’s the usual comicbook movie news and an old book news that gave me the feels~

Here are some BTS Vikings Season 2 videos and they are so much fun! Here’s my favourite one because I love it when cast and crew are having fun behind the scenes~

Arrow and Flash executive producer Greg Berlanti talks about this interesting simmetry between the main characters of both series, and how they mirror each other.

Barry (Grant Gustin) is different from Oliver (Stephen Amell). He’s a man of science and has more of a sci-fi bent, whereas Arrow has a bit more of a crime bent. We often talk about how Oliver comes off like a pessimist, but deep down he’s an optimist and has hope. Barry lost his mother at a very young age, his father was sent to prison for murdering his mom, he went through a lot of stuff – on the surface he’s bubbly and upbeat and seems like an optimist, but deep down maybe there’s no hope left.

Clark Gregg talks about the future of Agents of S.H.I.E.L.D. and what’s ahead for Marvel Studios… my favourite part was his comment about that scene about Agent Coulson “showing us his thoughts”~

I had stuff on my head. It was a combination of actual prosthetic stuff and visual effects, so part of it was real and part of it was put in afterwards. I’m not allowed to use my actual brain or to expose it, because if they were to take the top of my head off, there might not be one.

There’s this rumor that these are the four guys on the run for Black Panther: Chiwetel Ejiofor, Idris Elba, Chadwick Boseman and Michael B Jordan. Guess they will have to check if they want an older or a younger T’Challa. But first, Marvel actually has to annouce they are making a Black Panther movie!

Here are a couple of new stills and some promo images from The Amazing Spider-Man 2. Whatever they say about this new Spider-Man franchise, I love the fact that Spider-Man physically looks like Spider-Man! Just look at this pose! 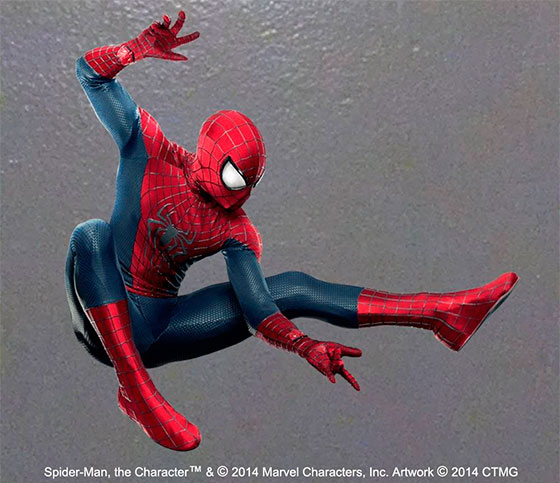 During the school summer holidays, my sisters and my cousins would write plays. And at the end of the summer, we’d perform them for our parents. That’s when I started acting. My sisters and my eldest cousin, Zoe, would write the play. My cousin Matt would make the stage … And I would always play the bad guy.

Yeah, remember that interview with J.K. Rowling and Emma Watson that restarted the Harry Potter shipping wars for a brief time? Here it is in its entirety! And they keep badmouthing poor Ron! Ok, not exactly… but still, Ron is Harry’s most precious thing! Don’t you remember Harry Potter and The Goblet of Fire?!

Hermione was the one that stuck with Harry all the way through that last installment, that very last part of the adventure. It wasn’t Ron, which also says something very powerful about Ron. He was injured in a way, in his self-esteem, from the start of the series. He always knew he came second to fourth best, and then had to make friends with the hero of it all and that’s a hell of a position to be in, eternally overshadowed. So Ron had to act out in that way at some point. But Hermione’s always there for Harry.

Talking about BFFs, Patrick Stewart and Ian McKellen talk about being the best BFFs ever… or rather recently. Apropos of both of them being on Waiting for Godot.

Our coming together is a relatively recent thing. But we fell into each other’s arms because of our similarities in our career, and because of our age and because we like the same sort of things. Despite the fact that he’s from Yorkshire and I’m from Lancashire! That’s the big difference between us. If Patrick does something other people think is a bit strange, I just say he’s Yorkshire!

Damn, The Weinstein Co. forks out $7m for the US rights for The Imitation Game starring Benedict Cumberbatch and Keira Knightley. That’s the highest ever amount paid for US distribution rights at the European Film Market! Bet they want it for Award season. Here’s ~

These guys got it so perfect, they did a better job than I ever could have. Benedict is unbelievable, and this is going to be a big year for Keira. Between this and Can A Song Save Your Life? she is going to be a major star. We look at this as a major release and we’re thrilled to have it.

The Lego Movie had a great openning day (and great reviews!), and everyone is pretty optimistic that it will do great by the time its run is over. So yes, everything is awesome indeed!