The Fangirly Diary of a Geek Girl: Hello Childhood, my old friend

Greetings, my fellow geeks. The Toronto Film Festival is still going and we had some news coming from that. Also, a couple of things from my childhood came back to hit me right in the feels. Here’s how it all started:

Steve McQueen was full of compliments for Michael Fassbender… I hope they remain making awesome movies together for years to come!

I think he’s the most influential actor of his generation. He’s like a pop star. Kids want to be that person.

And we had a couple of Hiddles articles talking about everything, but specially Only Lovers Left Alive, which I really want to watch. In the first one, Hiddles, Jim Jarmusch and Anton Yelchin talk about the movie… and we learn they are paid in bananas and are not assholes. LOL. Most importantly, we learned why those vampire weaves look so weird:

Their wigs were made up of a mixture of human hair and yak and goat hair mixed in. We wanted it to look not quite human; a little wild and a little strange.

In the other interview, there’s also talk about Marvel movies, and also talked about his varied taste in movies~

The thing is: I love so many different types of films. Honestly, four years ago on a Friday night, I went to see The Proposal, the romantic comedy with Ryan Reynolds and Sandra Bullock, which I loved, and on the next night, I went with a different friend to see Antichrist. I couldn’t tell you on Sunday morning which one I enjoyed more. I genuinely enjoyed them both for what they were. I think to have a varied palate is good. It keeps you sharp.

Coincidentally, I watched The Proposal that day with my mum for the first time. There was seriously nothing better on TV.

On this week’s DC dubious decisions, Dan DiDio says heroes’ personal life must suck and therefore never ever get married or whatever.

Heroes shouldn’t have happy personal lives. They are committed to being that person and committed to defending others at the sacrifice of their own personal interests.

And that’s why Batwoman cannot get married, you guys! But what about Aquaman? He’s married to Mera, right? Nu-uh. Dan DiDio says it isn’t so.

She may be the King’s Queen, but she ain’t marrying him!

Oh, also, Manhunter‘s Marc Andreyko will take over Batwoman from issue #25 on. 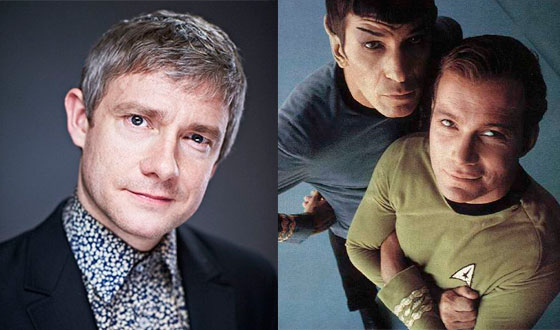 I’ve done a couple of conferences where you sit and sign autographs for people and then you have photographs taken with them and a lot of them all dressed up in alien suits or Doctor Who whatevers. I was terrified of doing it because I thought they’d all be loonies, but they are absolutely, totally charming as anything.

Yeah, remember about Benedict Cumberbatch being all “I won’t on new Star Wars”? Now he’s being all coy and adds to his denial that we shall “wait and see”.

Of course I’d love to do Star Wars and work with JJ Abrams again because we had such a good time on Star Trek. But nobody has been cast and there are no offers out to anyone apart from the regulars who are returning. So that’s that rumour quashed. We’ll have to wait and see.

The rumor that Elizabeth Olsen could be Scarlet Witch is still going, but when asked about it directly, she evades the question. But she would love to work with RDJ though!

I would do anything with him! If he was part of a project and I could be in any scene with him, I would do it hands down. He’s so talented. And so smart. You just don’t have that kind of humour unless you’re smart. I’m always having a Downey moment.