Captain America: The Winter Soldier has passed $100 million in the domestic box office after four days of release. Yes, Marvel keeps making cash. So proud of you guys!

Also, here’s a The Amazing Spider-Man 2 poster inspired by a classic comicbook cover. The result looks kinda fan-made, but not in a good way. It’s a decent attempt tho~ 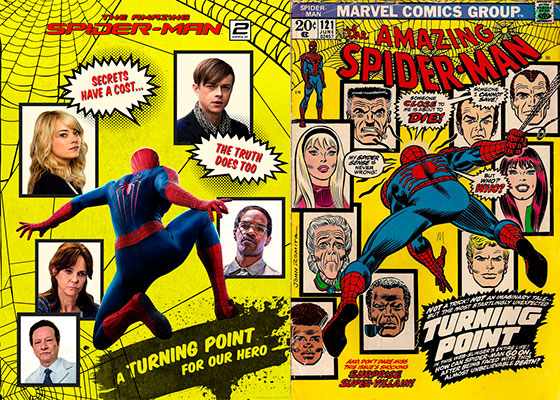 Also, habemus director for the Sinister Six spin-off~ And it’s The Cabin in the Woods‘s Drew Goddard. OK, fine, that’s a more than decent writer and director, so I guess the movie will be from decent to good.

I was impressed with what I saw of the production values — if nothing else, it looks like the new TMNT movie will have a lot of stuff going on and looking good (that toppling tower, for example) — but the changes to the basic design of the Turtles seemed to me to fall into the “fixing what is not broken” category. It’s altogether possible that, in the context of this new movie, these designs will work well and not seem so odd, but I still point to what Jim Henson’s “Creature Shop” team did with their rendering of the Turtles in rubber and paint as the best translation (in live action, anyway) of the Turtles as Kevin Eastman and I created them.

Here’s the official launch trailer for LEGO: The Hobbit and it’s so freaking cute I can’t! I bet it will be a success like all those other LEGO games!

So, those who saw Agents of S.H.I.E.L.D. now of all the terrible things that befell the poor main character, and also shock and betrayal! Or something like that~ Just like us, poor Brett Dalton was in shock when they told him about Agent Ward’s new role:

They proceeded to let me in on what their plan for my character had been all along. I don’t think anyone knew who the Clairvoyant was, so they told me first, “Well, Garrett is the clairvoyant and Garrett is your supervising officer and you trained under him so that makes you also part of Hydra.”  And I think I just sat there with my jaw open for the next 20 minutes, and they just did all of the talking because I couldn’t say anything.

Another brief character who returns to Agents of S.H.I.E.L.D. is Maria Hill! Yup, Cobie Smulders has the time now that HIMYM is over~ Wonder if it acknowledges her current job according to Captain America: The Winter Soldier.

The Amazing Spider-Man 2‘s first reactions are mostly possitive! The firsts review are more of a mixed bag tho!

Ohai, brand new pictures of Rise of the Planet of the Apes! Caesar and his people sure look fierce! 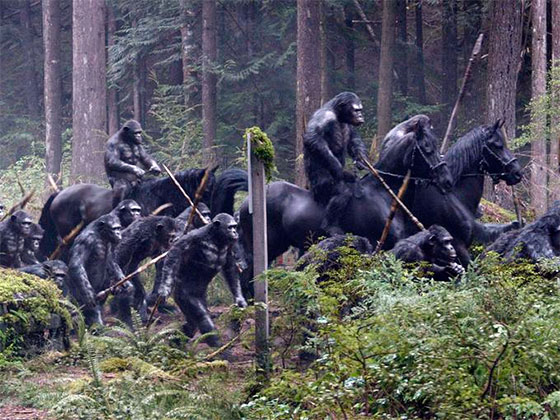 Two things I got from this article/interview with Hiddles while he films Crimson Peak. 1) He hugs Guillermo Del Toro “every day, repeatedly” because “He’s like a great Mexican bear”. I cannot “aw” enough~ 2) He wants to play a normal dude who gets to wear blue jeans… maybe in a romantic comedy. I still stand by my buddy comedy with Dwayne Johnson.