ZOMG! Captain America: The Winter Soldier broke an April box office record! It got over $300m worldwide! The previous owner of the record was Fast Five on 2011 with “just” $86 million. Damn! Get money, Cap!

It also meant the birth of a new meme~ The Hail Hydra meme. And how to make one is pretty simple!

Take a picture of any two people or creatures, where one is whispering to the other. Add the words “HAIL HYDRA” all in caps. 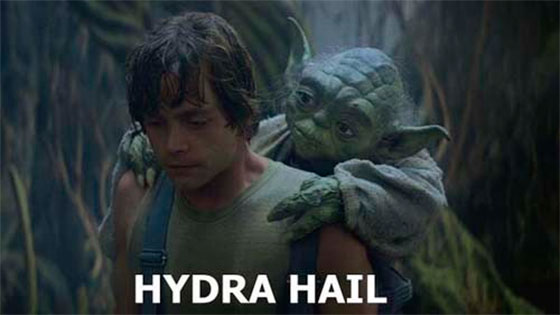 So, what’s next for Captain America? Well, if you saw the movie, you know they will probably follow the storylines that were left pretty much in cliffhanger state~

In the Marvel cone of secrecy, we won’t divulge too much, but I will say this. The movie is clearly written as a two-parter. There is a, there would seem to, the next movie would seem to require a continuation of the journey of the Winter Soldier.

Also, yes, Captain America 3 will premiere on May 6, 2016. You know what that means, kids? Cap will battle it out with Superman and Batman for the Box Office! So, who will back out? My bet is on Warner/DC since they have done it before, and invent some bullsh*t excuse… They keep saying they won’t tho and I don’t believe them. And by they, I mean Warner’s domestic distribution chief Dan Fellman.

It doesn’t make a lot of sense for two huge superhero films to open on the same date but there is a lot of time between now and 5/6/16. However at this time, we are not considering a change of date for Batman vs. Superman.

And what does Disney/Marvel Big Boss, Kevin Feige, had to say when asked about the possible Batman vs. Supeman and Captain America 3 battle? He gives zero f*cks.

Back to Captain America: The Winter Soldier, here’s what Sebastian Stan had to say about Bucky Barnes and his road to self-discovery hinted by that after credits scene!

At that point, I think some time has passed since the ending of the movie. I’m not sure how much, but some time has passed. All that scene really is about is that, wherever we pick him up in that scene, he’s obviously in a place where he’s been starting to kind of question things and be aware of things he wasn’t aware of before. And so, I don’t know, that might be somewhere on his research into finding things out about himself. There’s no particular time other than that’s where we catch him when we see that scene. And I’d say the seed for that was planted at the very end of the movie.

On not-Disney Marvel movies news, here are a couple new (two) characters posters for X-Men: Days of Future Past. Man, with all these characters, their designers are overworked. Not that they are ever very imaginative anyway, but hey, earn those bills! 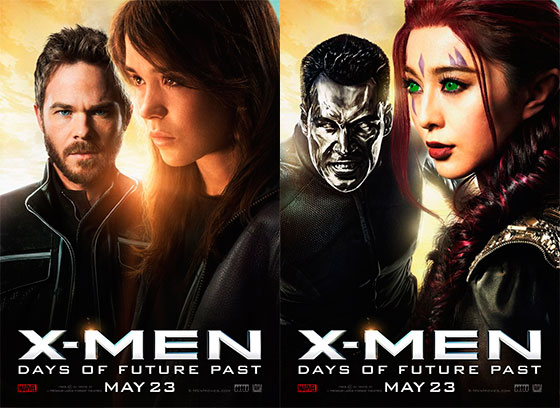 Game of Thrones gets record ratings because duh. But hey, the new season got biggest audience since The Sopranos‘ finale with a nice amount of 6.6 million viewers!

Pedro Pascal, who is fine but not hot enough for Oberyn, talks about his character’s bisexuality and our odds to get the full monthy~

Nobody asked me to hide anything. I was all in. When does Game of Thrones ever fail you in terms of like not going all the way with something? They give you candy from both sides. I’d insist upon it!

Bitch, please, the ratio of totally naked ladies to totally naked guys is laughable, but hey if you wanna provide, I won’t complain!

Anyway, let’s finish this day with Marvel because YAY Marvel! Also, Samuel L. Jackson will reappear in Agents of S.H.I.E.L.D.‘s season finale, which is timely since the whole organizations is falling/has fallen appart! No more info because Sam Jackson wants to keep his job… and life.

I did! Last week! I just shot the end-of-the-season show. You’re trying to get me fired and killed! I don’t talk about Marvel’s business. None of us do. … If they ask Kevin Feige and Kevin says, ‘We’d like for you to do it,’ I do.