The Fangirly Diary of a Geek Girl: Guillermo’s bringing sexy back~

You wait a moment, Doctor. Let’s get it right. I’ve got a few things to say to you. Basic stuff first. Never be cruel, never be cowardly. And never ever eat pears! Remember, hate is always foolish, and love is always wise. Always try to be nice, and never fail to be kind. You mustn’t tell anyone your name, no one would understand it anyway. Except children. Children can hear it sometimes, if their hearts are in the right place, and the stars are too, children can hear your name. But nobody else. Ever. Laugh hard, run fast, be kind. Doctor, I let you go.

Keeping up with the Star Wars theme, Mark Hamill clarified his position via Twitter on The Last Jedi, after multiple reports that he disagreed with the characterization of Luke Skywalker.

I regret voicing my doubts & insecurities in public.Creative differences are a common element of any project but usually remain private. All I wanted was to make good movie. I got more than that- @rianjohnson made an all-time GREAT one! #HumbledHamill

I think they like to be in control, and I like to be in control myself. When you get a guy who’s done a low-budget movie and you suddenly give him $180 million, it makes no sense whatsoever. It’s f**kin’ stupid. You know what the reshoots cost? Millions! Millions. You can get me for my fee, which is heavy, but I’ll be under budget and on time. This is where experience does matter, it’s as simple as that!

Here are new images from Black Panther, courtesy of Empire Magazine. Here’s one of Chadwick Boseman and Michael B. Jordan, the latter commenting that the film “took him to a dark place”. 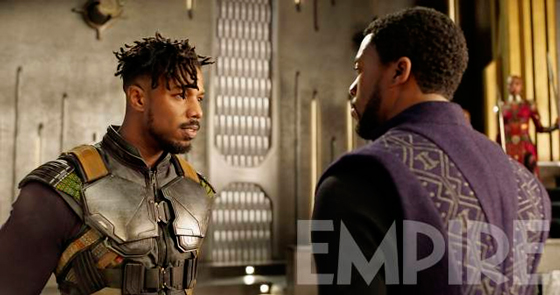 David Harbour talked with Variety about what he’d like to see explored in Stranger Things season 3 about his character:

I’ve been pretty vocal about how I love the dynamic between Joyce and Hopper, which I don’t feel like we got a lot of time to explore in Season 2. I just love that dynamic of these two lost people. I equate it to Jack Nicholson and Faye Dunaway in Chinatown or Indiana Jones and Marion in Raiders of the Lost Ark. These great, throwback, they hate each other but love each other kind of tropes. It’s done so sophisticatedly by the Duffers, and Winona is really game for it, too. We love playing scenes with each other. I would love more stuff with her.