Greetings, my fellow geeks. This week all the regular geek movie news, as well as awards, documentaries, TV series and comics! But the highlight for me was a curiously deep interview with Tom Hiddleston. Without further ado, here’s how the week started:

What a great way to start a geek week! Empire Magazine’s May issue has a cover full of pretty Star Trek style! LOL, Poor Benedict in the shadows though~

Talking about Star Trek Into Darkness, its director, J.J. Abrams, compares his approach on Star Wars: Episode VII to what he felt when he did Star Trek:

Even though I was never a Star Trek fan, I felt like there was a version of it that would make me excited, that I would think ‘that’s cool, that feels right, I actually would want to see that. How we were going to get there, what the choices were going to be, who was going to be in it – all of those things I knew would have to be figured out, but it was all based on a foundation of this indescribable, guttural passion for something that could be. It’s a similar feeling that I have with Star Wars. I feel like I can identify a hunger for what I would want to see again and that is an incredibly exciting place to begin a project.

Doctor Who sure is bringing the prequels lately. Here’s the latest one for the The Bells of St John episode. What a twist!

But my dear Doctor, even if you are lonely you shouldn’t speak with lone children in the park. People might talk~

Yesterday, the “Done in 60 Seconds” finalists were revealed, and the lucky five will go to the Jameson Empire Awards were overall winner get his prize! The other good thing? Hiddles was part of the jury… and has new suit! A quirky new suit with stripes and stuff! Yes, yes, I most sort my priorities~

In a weird turn of events, Benedict Cumberbatch is now Julian Assange’s e-mail pal. It’s even more curious because Assange totally hated that there was doing a movie about him and WikiLeaks, and didn’t want anything to do with Cumberbatch who gets to portray him.  I mean, sure, this info comes from The Sun, but still! According to the source:

When filming began things changed. Their email relationship is the talk of the set. Assange now thinks Benedict better understands his actions and motivations.

Three pieces of news for Iron Man 3! First a new TV spot that’s full of awesome. Nope, I won’t ever get bored of Tony Stark putting the armor on. Never.

Then, Disney keeps milking his Marvel stuff. Now there’s an Iron Man monorail in Disney World. I wonder if they’ll also paint it for Thor and Captain America. The third Iron Man 3 news comes from Guy Pearce, who talks about his character Aldrich Killian. Most importantly, he talks about Extremis!  To the question of what he’s most excited to see in the film, he goes:

I think the way Extremis works through people’s bodies. Often the visual effects guys would say, “At this moment, we’re going to see pulsing veins up your neck and we’re going to see that your eyes are going to sort of glow orange.” So, they had a few different ideas about how that was going to go and they were obviously very excited about pushing the envelope and doing things they haven’t done before.

Young Avengers #3 preview! Ok, this time I love both cover equally. And that’s because Miss America is kick-ass. Also, love the description of the issue AND they keep using the Tumblr dashboard design in the recap page~ 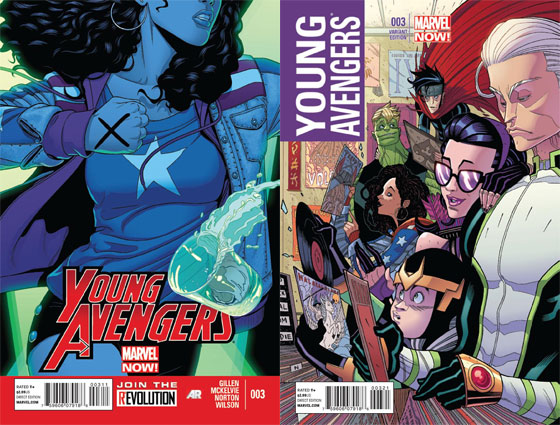 Pacific Rim gets good buzz on twitter from all the lucky bastards who went to the early screening. That is good because I want this movie to be so freaking good.

I was born to play Hercules. I have loved and honored the mythology over the years – since I was a kid. When I first broke into Hollywood, Hercules was one of the movies that I, not chased, because I didn’t have the power to chase anything, but always had in the back of my mind. Everything happens for a reason, and it’s come back around full circle.

And he totally wants to be Black Adam if there ever is a Shazam movie, to what I say “excellent” Montgomery Burns style.