The Fangirly Diary of a Geek Girl: Fantastic news and where to find them!

Warner Bros. shared the brand new logo of Fantastic Beasts and Where to Find Them, the Harry Potter spin off set in the Roaring Twenties USA and has magizoologist Newt Scamander as protagonist. Pottermore got to talk with the designing team and here’s what they say about it:

If you think of Harry Potter, that logo instantly comes into your mind: the lightning bolt ‘P’ and the shape of the words. So we wanted this one to feel like it was born of that same world. We were trying to come up with something that drafted similarly off that iconography but in a new way. In a Fantastic Beasts way.

Philip Pullman’s fantasy series His Dark Materials is being adapted for BBC1! Yes! We finally can get an adaptation of the full series, and forget a bit about the watered-down film version! Author Philip Pullman seems quite happy about it!

I’m delighted at the prospect of a television version of His Dark Materials. […] As for the BBC, it has no stronger supporter than me. I couldn’t be more pleased with this news.

On not so great TV news, the Twin Peaks revival won’t premiere until 2017. But why, I whine? Well, Showtime president David Nevins wanted it for 2016, but with the combination of that (now resolved) David Lynch contract “issues” and episode-order expansion… yeah, 2017 is way more likely.

Apparently, Quiksilver will try and find who Daddy Dearest is in X-Men: Apocalypse (it’s Magneto, BTW!), and then get involved to the “whole Apocalypse madness”. Here’s what Evan Peters had to say exactly:

The story is that my character is searching for his father and wants to find him. It starts there and then he jumps on the X-Men train and gets sucked up in this whole Apocalypse madness: He tries to stop him from destroying the world.

The geeky nominees from People’s Choice Awards 2016 include Arrow, Gotham, Supergirl, The Walking Dead, Game of Thrones, Heroes Reborn, and WHAT THE HELL, Daredevil got snubbed?! Well, f u all!

Rumor has it that Disney will stop making Slave Leia Toys. Well, I guess that’s what you make for not calling her Hutt-Slayer Leia and making more figures of her strangling Jabba to death with the chains he put her on. The rumor came originally (as far as I am aware) from cheesecake comicbook artist Scott Campbell, who also whined that “we can’t even draw Leia in a sexy pose at Marvel, let alone in that outfit!”. I know the dude is defending his turf but geez, cry me a river! It’s not like you don’t have ALL THE OTHER FEMALE MARVEL CHARACTERS!

This was the day a cover spread like wildfire through the fandom, the EW cover of Fantastic Beasts and Where to Find Them! Here we had Eddie Redmayne looking like The Little Prince all grown up (or, alternatively, a well dressed Time Lord), but it’s in fact Newt Scamander. I know I already posted it on Facebook but whatevs. Also, we got 8 “magical” first photos! 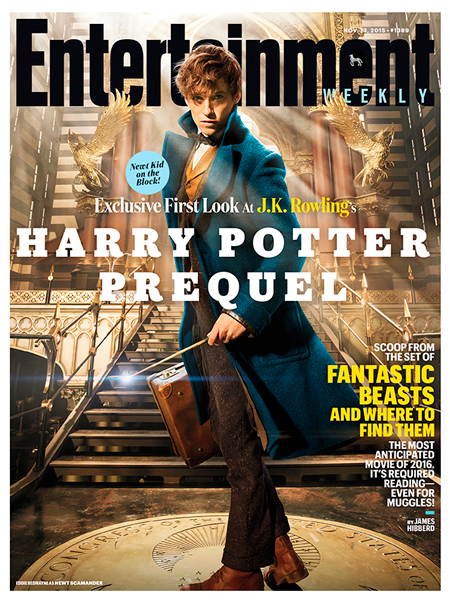 Habemus character posters for Star Wars: Force Awakens! Rey, Finn, Kylo Ren, Han Solo, and Leia each get their own solo poster, designed with a consistent style… except for Leia who isn’t holding a weapon or looking straight at the camera. Girl still look great though! Also, where is poor Poe? 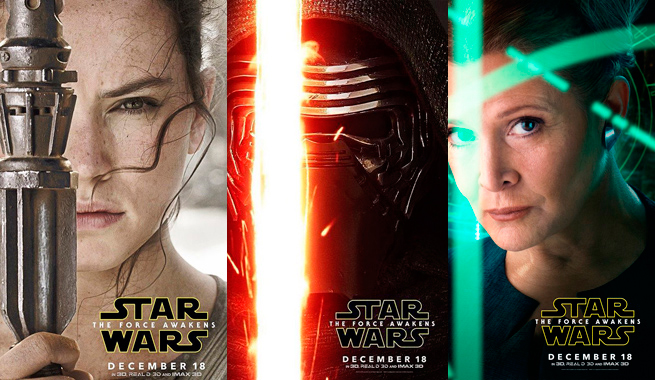 Apparently, Doctor Who and LEGO are chummier than ever. Not only Doctor Who got included in the video game Lego Dimensions (whose character spotlight trailer is down below), as well as get its own fantastic Lego playset, The Doctor may be joining Emmet, Wyldstyle and co for The Lego Movie 2. Will it be just a cameo? Will it be that movie’s Batman? Who news! But I sure would love to see Capaldi’s Doctor as a minifig having adventures!

If you know me you know I don’t like Ryan Reynolds very much. But I do like his version of Deadpool (as long as he keeps his mask on), so yay to this video of his Deadpool bossing around kids in X-Men costumes on Halloween!

Talking about Deadpool Collider sure had a super huge special about it, dropping new info left, right and center! F.e. director Tim Miller saying we are getting Pansexual Deadpool and he “want that quoted” yo! Apparently, it was important for the studio that Reynolds remained recognizable and “attractive”, and “just not Freddy Krueger”. Dammit! Also, Ryan Reynolds helped outline the Deadpool script, according to screenwriters Rhett Reese:

This is a pretty little known fact but when we developed this script to write it, we outlined it very seriously and we did that with Ryan. So it was really the three of us, Paul [Wernick, the other screenwriter], Ryan and I, and I think sometimes people make the assumption that the star is just the star, he just shows up and he does his job and that’s it; and he was so instrumental.