The Fangirly Diary of a Geek Girl: Definitely maybe not Khan

Greetings, my fellow geeks. This week we had H day, that is The Hobbit day, that and Star Trek kept stealing my attention, but we also got a couple of damn good new trailers to satisfy our geeky needs. But let’s see how the week started first~

Damn, Ian Mckellen will be in the Doctor Who Christmas Special! Or at least, his voice will be. Yup, it’s been totally confirmed he’s going to be “Voice Of The Snowman”.

Martin Freeman talked about how charming Lucy Liu was when he met her at the Emmys, how great it is to be immortalized as a Lego minifig, and how glad he is Benedict Cumberbatch got to be Smaug in The Hobbit:

We went up for it basically about the same time, during the first series of Sherlock and he wanted to do it, he really wanted to be Smaug because he remembered that character from boyhood and being a fan of the book as a boy. I was very, very pleased for him when he got that because I think he’s right. I think it’s a very, very good piece of casting.

Disney is going to make a sequel to Alice in Wonderland. Yes, the one directed by Tim Burton. While it got mixed reviews, the movie did fine at the box office so, yup, sequel. Will Tim Burton direct again? We don’t know yet.

Fastastic Four gets a reboot date for March 6, 2015. Dammit, I knew it was hardly going to happen, but I wanted the rights to come back to Marvel.

Don’t know why I found this TV spot so cute… must be Gollum. I did love the Riddles in the Dark part of The Hobbit~

Here a couple of descriptions of the 9-minute preview of Star Trek into Darkness that some lucky fellows will get when they watch The Hobbit: An Unexpected Journey in IMAX. J.J.Abrams is a genius, manages to stick most major characters in that time, and gets to frustrate fans because it left us with a Spock cliffhanger and we still don’t know the identity of Benedi-kun’s character. All in less than 10 minutes. Genius!

Tom Hiddleston did some interviews where he talked about his current projects, and was charming as usual, before he was off to do his work as jury member at the BIFA.

Iron Man 3 starts filming its final parts in China and some pictures where revealed. Damn, RDJ looks quite manly! 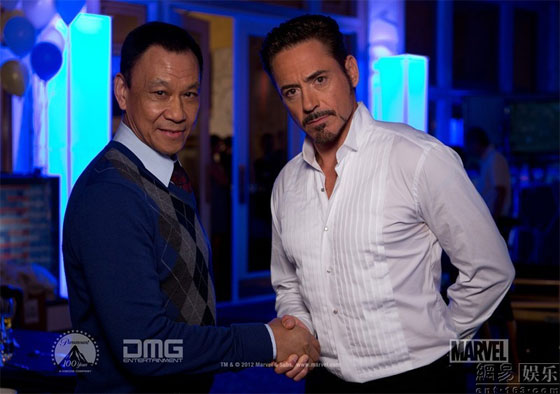 Stop motion awesomeness with Lego minifigs and Hot Toys figures! For both Marvel and DC fans!