Well damn! Here’s the official trailer for Netflix’s The Punisher with a cool Metallica song (“One”) as background music.

After exacting revenge on those responsible for the death of his wife and children, Frank Castle uncovers a conspiracy that runs far deeper than New York’s criminal underworld.

Marvel’s The Punisher premieres globally sometime in 2017, on Netflix.

In more “well damn” news, Taika Waititi may end up directing the US live-action adaptation of Katsuhiro Otomo’s manga, Akira. Some sites say the deal is done, others say it is still in negotiations. Warner Bros/Legendary Pictures purchased the rights to the manga back in 2002, and has been in development hell since then. The manga has six volumes, so there may be two movies with each one covering three volumes. I still can’t image with Hollywood star will they get to scream Tetsuo and Kaneda at each other… or whatever anglicized version of their names they manage to invent.

Linda Hamilton is the newest performer returning to an iconic role. Yep, she’s back to Terminator franchise. Tim Miller, director of Deadpool, will be directing this film. Arnold Schwarzenegger is already set to return. James Cameron is also returning to the franchise but in a producer rol… and now I know why he was bitching about Wonder Woman being not as cool as Sarah Connor. So, are we going to pretend everything after T2 didn’t happen? Because I can live with that. Anyway, here’s what James Cameron had this to say about her return:

As meaningful as she was to gender and action stars everywhere back then, it’s going to make a huge statement to have that seasoned warrior that she’s become return. There are 50-year-old, 60-year-old guys out there killing bad guys, but there isn’t an example of that for women.

Shigeto Koyama, who has worked on many things from Evangelion to Big Hero 6, is illustrating the cover of the local edition of the Marvel comic, Ms. Marvel… and she looks adorable! 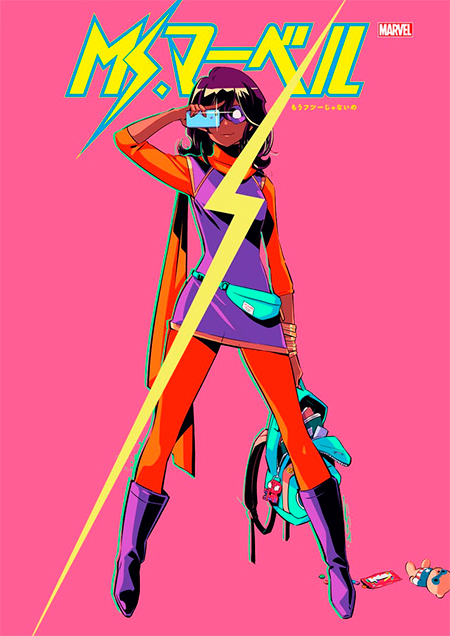 Yep, HBO finally decided to order a pilot and script committment for Watchmen. The series, based on Alan Moore’s 1986 comic series, is being developed for the network by Lost and The Leftovers creator Damon Lindelof, who already teased on his Instagram that work has begun in the show’s writing room. HBO previously developed the book into a series back in 2014, but abandoned it. And Lindelof wants no sloppy seconds, so he starting from scratch! I wonder if they are going to touch the Before Watchmen comics or maybe even the upcoming Doomsday Clock comics… but that one is quite unlikely.

Doug Liman claimed that he loves the Edge of Tomorrow sequel “way more than the story of the original film”. The tentatively titled Live Die Repeat and Repeat will start off as a continuation that reverses the clock, rather than moving it forward. And thus, “it picks up where the last one left off, but then we go backwards in time”. So Tom Cruise’s Bill Cage is a cowardly douchebag and we might get to see how Emily Blunt’s Rita Vrataski became “The Angel of Verdun”? OK, I can dig that.

I never managed to get into CW’s Riverdale, but I might give a shot to its future companion, Chilling Adventures of Sabrina. Yes, the teenage witch Sabrina. But nope, it won’t be like the one with Melissa Joan Hart. According to Variety:

[Chilling Adventures of Sabrina] reimagines the origin and adventures of Sabrina as a dark coming-of-age story that traffics in horror, the occult, and witchcraft. The series is described as being tonally in the vein of horror classics like “Rosemary’s Baby” and “The Exorcist,” and will see Sabrina wrestling to reconcile her dual nature as a half-witch, half-mortal while standing against the evil forces that threaten her, her family, and the daylight world humans inhabit.