Greetings, fellow fangirls and fanboys! This past week we had lots of TV series news, including trailers, first looks, a spin-off, and a cool feature for a 100th episode landmark! Here’s how the week started:

To mark the 20th anniversary of the publication of Harry Potter and the Philosopher’s Stone, BBC will air a new documentary (complete with an exclusive JK Rowling interview!) titled Harry Potter: A History of Magic. But wait! There’s more! The British Library will run an exhibition with the same title which will be open from 20 October to 28 February. This exhibition will include rare books, manuscripts, and magical objects which form an aspect of Harry Potter mythology.

Also, Thor: Ragnarok‘s producer Brad Winderbaum explained how everything is Loki’s fault. Again. And by everything, I mean Hela specifically.

[When] we left Loki, he kind of achieved his goals, he became the king of Asgard, and he is ruling that place. And what we come to learn, what Thor comes to learn early on, is that there’s a lot of terrible things in the cosmos that just shouldn’t be that way. And we learn that Odin was doing far more than it seemed on the surface to keep the universe safe. There were all these threats that he had quelled or was keeping at bay, using his strength and power to do so, that Loki was completely unprepared for. So he becomes the King of Asgard, everything is great, it’s a good party. But he failed to realize the threats that were just over the horizon, Hela being the biggest and most terrible one of all.

We are getting a Star Wars anthology book and I am so happy dammit! Celebrating the 40th Anniversary of the Star Wars universe, Lucasfilm and Del Rey will publish Star Wars: From A Certain Point of View, with an amazing list of authors such as Greg Rucka, Delilah S. Dawson, Kieron Gillen, Claudia Gray, Matt Fraction, Wil Wheaton and Pablo Hidalgo. Not only that, but Del Rey and the authors are offering hints of their stories and key quotes on Twitter using the hashtag #FromACertainPOV. The book comes out on October 3 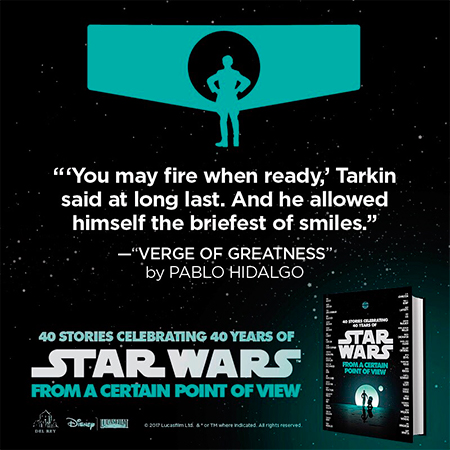 Principal photography on BBC Two and Amazon’s Good Omens has begun and thus we had our first look at Michael Sheen and David Tennant as lead characters Aziraphale and Crowley. Sheen looks like The Doctor, a mashup of them. Tenny kinda looks like Bill Nighy. I am not sure I like either of those looks yet, but maybe they will look better in motion with all the necessary lighting. Here’s what Neil Gaiman (who co-wrote the book with dearly departed Terry Pratchett) had to say:

People have fallen in love with an angel and a demon in a book by Terry Pratchett and me, and they have been excited and nervous to see how they would appear on screen – and I was probably the most nervous and excited of all. This is a first look. Michael Sheen is the best and finest of bookseller angels, David Tennant the coolest and most delightful of demons. Together they are one hell of a double act (or do I mean one made in Heaven?) 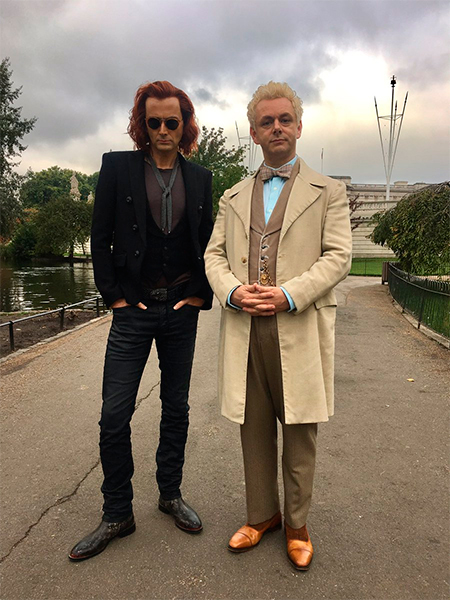 Ben Affleck explained Batman’s dynamic with his fellow heroes on Justice League, and it is kinda cute~

In Batman v Superman, he was at the end of his rope. But in Justice League he’s finding hope again. He has to open up and play well with others. He knows he needs them.

Gal Gadot also talked about Wonder Woman in the film, and her own dynamic with Batfleck~

Since they’ve fought together, they know each other’s strengths. They also understand the hope Superman stood for, that was lost [when he died], so they feel that more than the others.