Batfleck aside, DC comics has me a couple more dubious decisions this week. First, there’s Justice League Canada which confuses me but doesn’t bother me so much. So yeah, Justice League of America is getting a rename! And it will be written by Canadian Jeff Lemire~

This is still very much set in the regular Justice League universe and the team will still have some of the bigger named superheroes, but they will actually be located in Canada now, and there will be a couple of new members who are Canadian. So obviously as a Canadian, and as a Canadian storyteller, it’s something I’m very proud of.

Then, there was Lobo’s new look. Or rather this tall, dark and sorta handsome guy is the “real” Lobo, and the one we know and love (sorta) is an impostor! Yep, you can read all about it on Justice League #23.2: Lobo. As you can imagine, the fans weren’t so happy. I suspect this real Lobo will eventually die and the regular (fake) Lobo will remain as comics usually maintain the status quo. But if it doesn’t, well, I’ll just be very surprised. 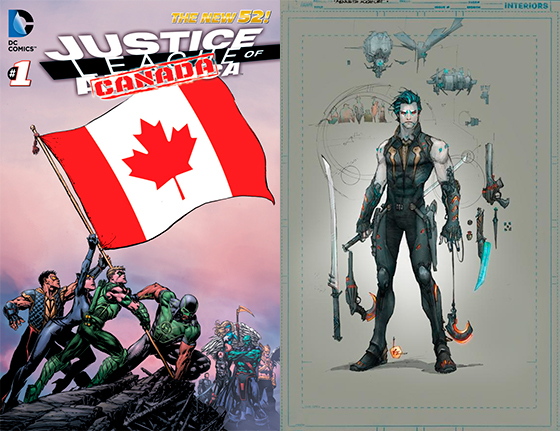 This was not a good week for DC fanboys~

Pirates of the Caribbean 5 gets official name and its Pirates of the Caribbean: Dead Men Tell No Tales, which has been the introduction on the Pirates ride at Disneyland since 1967. It’s gonna be directed by the dudes that did the well-received Kon Tiki (which also won an Oscar), Joachim Rønning and Espen Sandberg.

Peter Jackson will direct an episode of Doctor Who… as long as he gets a Dalek, according to Troll King Moffat himself. And here’s the other stuff he had to say about Doctor Who and Sherlock during the AdLib Comedy event. But in reality, he never said anything useful as usual. Bastard.

Joss Whedon apparently has a problem with Star Wars: The Empire Strikes Back. He feels there wasn’t a proper ending. Dude apparently doesn’t like cliffhangers. Guess he doesn’t like Lord of the Rings movies besides The Return of the King~ He also doesn’t like Twilight or movies like it. On that we agree!

The Twilight thing and a lot of these franchise attempts coming out, everything rests on what this girl will do, but she’s completely passive, or not really knowing what the hell is going on. And that’s incredibly frustrating to me because a lot of what’s taking on the oeuvre of Buffy, is actually a reaction against it. Everything is there — except for the Buffy. A lot of things aimed at the younger kids is just Choosing Boyfriends: The Movie.

Also, check the new Agents of S.H.I.E.L.D. promo where we get to watch our first non-pilot footage! Also, hey Cobie Smulders!

So, Tom Hiddleston’s love affair with Empire Magazine takes its next logical step and Loki gets two covers (one regular and one for subscribers) along with the Thor covers for Thor: The Dark World. 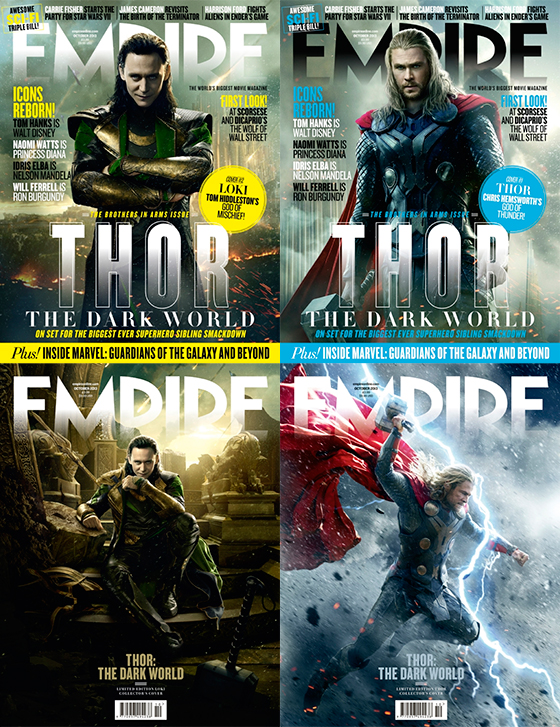 I am full of glee, and Hiddles is full of feels~ He also talks about fighting styles between his character and Chris Hemsworth!

It’s fun to play these opposites. Even down to the fighting styles: Chris was talking about boxing, all right-hooks and upper cuts. I was talking about capoeira; there’s this sort of balletic elegance to the way Loki fights because he’s the trickster, he’s the deceiver, he’s the shapeshifter. Thor is a block of granite, or rather uru [the material from which Mjolnir is made] and Loki is like the wind.

In the article inside the magazine, director Alan Taylor says they are totally killing Asgardians! Producer Craig Kyle also comments:

In our film, finally the Bifrost has been rebuilt, but during that time, when the cops were largely cut off from the rest of the universe, you had miscreants that came in from outside the Nine Realms, pillaging and destroying and causing havoc. So that’s what our guys have been doing now – trying to put all these fires out across the Nine Realms.

Christopher Eccleston finally says something about his part as Malekith in the movie! Thanks Empire for making him talk!

It was when the Ark crashes into Asgard. I come off the ship, blow up the throne and then stride through to have my confrontation with Odin. Pretty good first day, destroying Asgard. That’s what it says in Malekith The Accursed’s diary: ‘Tuesday. Destroyed Asgard’

Talking about Eccly, Empire also released images of Thor: The Dark World, where we finally have a clear look of Malekith: 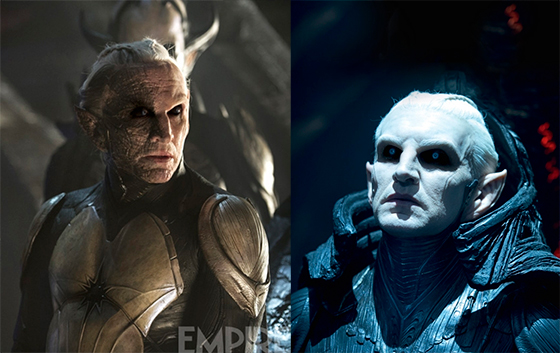 Empire Magazine also has boss Kevin Feige talking about Guardians of the Galaxy, giving sorta detailed info on the team, including that Gamora starts the movie as a villain or at least working for them! Talking about villains, the main baddie is Ronan The Accuser, but Thanos is going to be around:

Ronan The Accuser is very much the main bad guy. And Thanos is lurking above it all. You will learn more about Thanos in Guardians, for sure. Certainly you’ll get more than the one turn around and smirk. You’ll get much more than that!

And that’s it for the week. Before I go, here’s Game of Thrones‘s VFX reel for Season 3 as well as special makeup effects in that show and The Dark Knight. Also, here are the minitatures used on Nolan’s Batman trilogy~