The Fangirly Diary of a Geek Girl: Comic-Con hangover!

Greetings, my fellow geeks! The San Diego Comic Con (SDCC) is over but before it left, it regaled us with so much stuff, that went and stretched through almost all the week. Here’s how the week started!

We had a description of the short footage of Batman V Superman: Dawn of Justice. Seems neither Batman nor Superman is very happy with each other.

And because description aren’t enough, here’s the first (bootleg) look of Batman in said film. Batfleck seems to be in an armour pretty similar to the one Batman wore to kick Superman’s ass in Frank Miller’s The Dark Knight Returns! 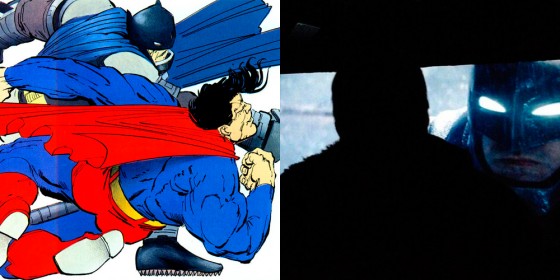 And now all the Marvel stuff! First, here’s James Spader talking about his character Ultron! Which in turn makes Chris Evans be scared of the character because of his voice~

he’s immature, and yet has knowledge of comprehensive, broad history and precedent, and he has created in a very short period of time a rather skewed worldview. Which is certainly not unprecedented! He’s probably self-absorbed.

Also, Paul Bettany talked about what attracted him to his new character Vision, who indeed has some relation to J.A.R.V.I.S. but he won’t spoil what or the Marvel snipers will get him~

The thing that appealed to me is that this sort of nascent creature being born, being both omnipotent and totally naive, the sort of danger of that and complex nature of a thing being born that is that powerful and that created in a second and the choices he makes morally are really complex and interesting. They’ve really managed to maintain all of that, the old image I love is of him crying, I think it’s really expressed kind of beautifully in this Avengers film.

In Guardians, Thanos is just another step forward from Avengers. We wanted Ronan to be the bad guy, did not want to spend too much time with Thanos but wanted to show there was a guy behind the guy, the Emperor from Empire Strikes Back, behind Darth Vader. Just to get him in his throne, leaning back and smirking.

Talking about Thanos, Marvel finally issued the press released that oficially confirms that Josh Brolin is Thanos. And we are totally getting a Guardians of the Galaxy sequel in July of 2017!

Crimson Peak is made of awesome, or so they lucky bastards who saw the footage at SDCC tell us. And it has a lovely Tom Hiddleston voiceover! Talking about that charming fella, Guillermo Del Toro promised to bring him next time and he also had nice words about him~

I must tell you girls, Tom Hiddleston is the nicest fucking guy on Earth. It used to be in the past that you were either nice, or you were good-looking and an asshole. Now that barrier is ruined.

But what else Legendary has for us? Godzilla 2 with Rhodan, Ghidorah, Mothra. Yep, they straight up and said it, and even showed a teaser for it! Good gods, that’s great! There was also Skull Island with freaking King Kong! Or maybe some other giant gorilla… And then there was Warcraft! And the footage is said to be so freaking awesome! And the Orcs are CGI but Avatar quality CGI! And beautiful Travis Fimmel is probably playing Alduin Lothar! And the montage showed a freaking epic battle!

Finally, DC Comics was showcasing all their TV series and launched new trailers for all them but The Flash. Poor Flash! First, we have the new Gotham trailer where you can see Bruce Wayne setting off on his journey to become the goddamn Batman, a mention of Arkham Asylum, a possible reveal of how Oswald Cobblepot becomes known as The Penguin, and Selina Kyle looking badass adorable. Also the acting looks great!

And there was a trailer for Arrow where you could see glimpses of Ra’s Al Ghul! You know, the villain played by Liam Neeson in Batman Begins. Yes, he is a Batman villain but he’s been mentioned through all of Arrow’s second season so it didn’t come out of nowhere. And yes, Arrow likes to add characters that are not strictly Green Arrow comics into the show. You won’t see me complaining. I just might watch it more frequently. Then again, binge watchings are awesome!

And finally, we have the Constantine one! Yes, it’s pretty much scenes from the pilot but we also have a look at future episodes too! Also, David Goyer hinted we might get other members of Justice League Dark… which might include Zatanna which is what every fanboy is claiming for~