The Fangirly Diary of a Geek Girl: Between the detective and the deep blue god

Good morrow, fellow geeks. This week, anglophile fangirls found themselves in a (predictable) conundrum and that’s what the title referes to. The rest? We, as usual, have some comic news, some superhero movie news and some video game news. And, of course, old fandoms! So, come on, let us see what the week brought us.

Saw Richard II of BBC Two’s The Hollow Crown. I enjoyed it immensely (I may write about the whole thing after all movies are shown)… and at the end a new trailer/ad announcing Henry IV, Part I next saturday. Debauched and ‘serious business’ Tom Hiddleston? Damn, that’s good marketing.

Only Lovers Left Alive starts filming in Detroit! [1] Of course, the cat was out of the bag the day before, when Mr. Hiddleston couldn’t contain his excitement and tweeted about it indirectly.

Here’s the trailer for new Naruto movie, Road of the Ninja, which, apparently, is about the main character getting involved in a genjutsu (illusion) in where Kyuubi never got sealed inside him and he didn’t have a crappy life. Also, it was written by Kishimoto himself… so it’s like official AU fanfiction?

What? I have told you my tastes are varied and broad! I don’t only blog about delicious Englishmen!

I am really loving all the little bits of Django Unchained stuff that keeps coming! Here the first TV spot!

Oh, and remember the footage of The Dark Knight Rises that appeared at the MTV movie awards? It’s finally online!

Talking about Bats, Warner launched two interactive websites for the movie. One is fun, where you become Gotham’s most wanted using a webcam. The other is useful, and gives you an interactive map that shows all the IMAX theaters that will have the movie.

Guess who’s back? Back again! Joker’s back! Tell a friend! Yup, one of the most iconic DC villains will return in the New 52, with the omniously named storyline “Death of the Family”. Yeah, things are always sh*tty to the Bat-family.

Lots of pictures of Naomi Watts as Princess Diana have surfaced on the internet. It’s for the movie Caught In Flight, about the last two years before her tragic death in 1997. Also, it’s quite eerie how just like Lady Di, Naomi looks.

Man, this Entertainment Weekly cover about The Hobbit looks so weird but whatever, it reminds me we are getting closer! 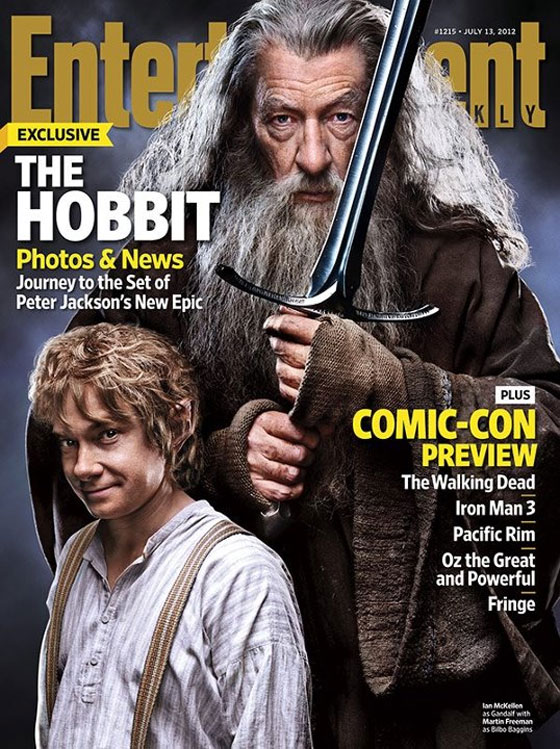 Also, here’s a gallery, and damn, Martin Freeman looks so cuddly as a hobbit, almost as cuddly as he looks with the grandpa jumpers from Sherlock.