The Fangirly Diary of a Geek Girl: Beauty and The Purple Man~

Greetings, fellow fangirls and fanboys! It’s the week of Empire Magazine’s Avengers: Age of Ultron issue and the Fantastic Four trailer, but also many awesome castings news! But before that, here’s how the week started:

Robin Lord Taylor, who plays Oswald “favourite Gotham character” Cobblepot, got interviewed and got to talk about a future meeting between his character and Edward Nygma. OMG Yes! I was waiting for that!

Edward Nygma and Oswald finally meet, and it is, hands-down, one of the top three things that we’ve shot in the whole series. It’s one of my favorite scenes, and I’m so excited for more. They’re both such oddballs and so different, so differently odd. The dynamics between the two of us is just so fun to play and so different. To have two classic villains come together, I think it’s one of the first times it’s happened so far in the series. That’s what I’m looking forward to.

So, The Crow reboot productions has had some problems along the way, and it seems it now has lost its lead actor. Yep, first we had Luke Evans doubting his presence in the movie and that “it’s a question probably to ask [distributor] Relativity”. Well, according to The Wrap, Luke Evans is totally not going to be the titular character, which kinda sucks. And also makes me glad Tom Hiddleston didn’t get the part in the first place because this is looking a bit messy. But hey, the movie could escape production hell and make a bunch of bank like World War Z, right?

BTW, that first Star Wars spin-off movie that nobody can seem to decide if it’s about Bobba Fett or Han Solo? Well, Latino Reviews says it’s because it’s about both of them! Yay! Well, it is implied that they have history together!

Yay! Here’s the opening scene of Outlander‘s return episode! It’s a parallel to Claire’s own monologue at the beginning of the series, except now it’s Jaimie’s turn!

MTV asked Mark Millar, apropos of his promo tour for scriptwriting Kingsman: The Secret Service, what did he feel about Marvel loosely adapting his Civil War storyline to the big screen. Pretty relaxed, actually.

They’re a money machine, they’re amazing. Whatever they do is gonna be a billion dollar movie and it’ll be great. You know as a fanboy I grew up, since I was 4 or 5 I planned to be Spider-Man. Even now I still think it’s possible! I couldn’t be more relaxed about it. Almost any other studio could screw it up. I’ll just show up on the night and enjoy the film.

According to this “hot rumor”, brought to you by Latino Review, Guillermo del Toro will use the following character for his Justice League Dark, which I hope to watch someday: John Constantine, Zatanna, Deadman and Jason Blood a.k.a. Etrigan The Demon. Not a bad team at all. Kind miss Swamp Thing tho! In the link there’s also a breakdown of all these characters in case you need your memory refreshed, or if didn’t know who were them in the first place.

Tyrese Gibson got hold of the fancast of him as Green Lantern John Stewart (who is way better than Hal Jordan, especially for us that watched the Justice League cartoon), and boy was he excited. Since then he has been posting fanart to twitter (Green Lantern Oath included!), telling Idris Elba (another fan favourite for the role) to “fall back I got this!”, and generally lobbying for the job. I appreciate the enthusiasm, dude! Follow your dreams! 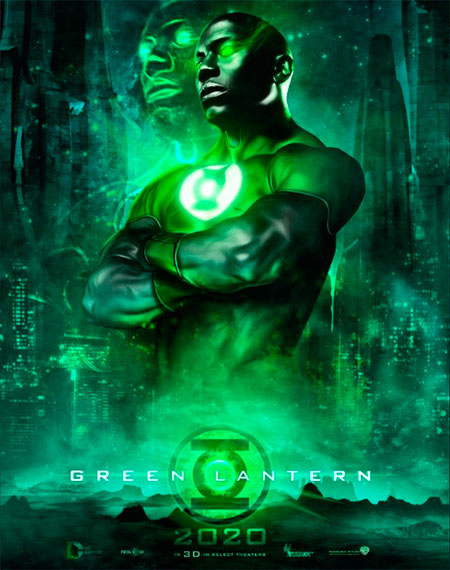