So, we have four possible actors for the part of villain Dr. Doom in the new Fantastic Four movie. And one of them is Eddie Redmayne. Say what? Of the propects my favourite one is Domhnall Gleeson actually~

Collider has the goodies! First, Joss Whedon directed one of the Captain America: The Winter Soldier after credit scenes! Considering one is related to Avengers: Age of Ultron and the other is more related to the Captain America franchise, I’ll let you guess which one Whedon directed~ Also, Anthony & Joe Russo must have done something right, because they are back to direct Captain America 3, and they are already bouncing ideas with the scriptwriters about what it will be about so yay! BTW, Chris Evans might have said he wants to retire from acting to be a director, but that doesn’t mean he won’t fulfil his Marvel contract. So yeah, he will probably be just Captain America for the foreseeable, and while direct movies when not. Also, that cameo in Thor: The Dark World totally doesn’t count as how many times he’s contractually obligated to be Cap! Finally, just like Chris Hemsworth, Scarlett Johansson also gushes about Avengers: Age of Ultron ‘s script… and Joss Whedon!

It really feels like the next step, and all of our characters, our relationships with one another continue to progress, become more intertwined, more complicated, more meshed.  And the film has a lot of great comic book moments that the fans are gonna love, but it’s also got a lot of really great dramatic moments that audience members, I think, will really relate to.

Game of Thronesgraced the cover of Vanity Fair! And apparently George R. R. Martin thinks that “it’s alarming” that the TV series is catching up to the book… Well, then you should writer faster, Mister! Show co-creator David Benioff talked to George R. R. Martin about how every character ends, just in case.

If you know the ending, then you can lay the groundwork for it. And so we want to know how everything ends. We want to be able to set things up. So we just sat down with him and literally went through every character. 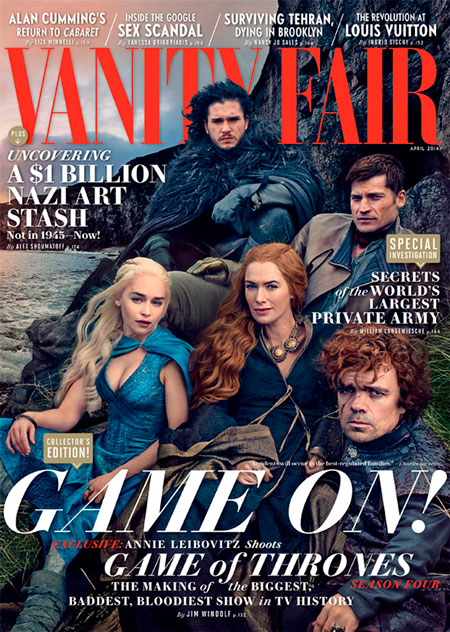 Here are some pictures of Grant Gustin in his Flash costume “in action”~ I’m still not sure about it, but then again these pictures are behind-the-scenes and the costume was designed but Academy Award winner Colleen Atwood. So… let’s have some faith! 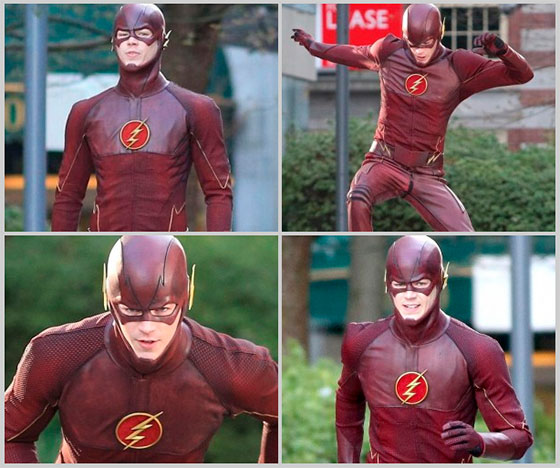 Here’s the very first image of the Constantine pilot from the set, where you can see the titular character looks damn close to the comicbook one! Matt Ryan dyed his hair blond and he totally rocked the look! Only thing missing is the cigarette~

Constantine follows enigmatic and irreverent Liverpool con-man-turned-occult-detective John Constantine, who is reluctantly thrust into the role of defending our world against dark forces from beyond. 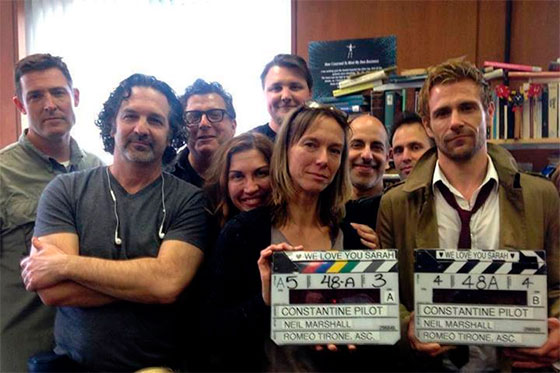 There’s been people who had seen Darren Aronofsky’s Noah… and the twitter reactions have been mostly good! But people will definitely find it polarizing, which is common for an Aronofsky movie. Also, they also wonder if the studio doesn’t know how to sell this movie. Mostly likely, they don’t.

The Amazing Spider-Man producers talks about the possible Sinister Six and Venom movies. Of course they want franchises out of it, and the grand scheme of all of them will have its centrepiece in Spider-Man! Also, they seem very enthusiastic about Venom~

As you know, Venom was also called ‘lethal defender of the innocent’. We had a great history with him, especially caring for the homeless, which is a very sensitive issue and something that many of us are very concerned with. Our villains all represent a different side of the misunderstood, and some of them unfortunately turned to the dark side. Venom happened to be a phenomenal character.