Anne Rice is back with a sequel of Queen of the Dammed called Prince Lestat, and it’s a “big Vampire Chronicle about Lestat and the other vampires… and what they are doing right now”. She revealed the info on her son’s internet variety series called “The Dinner Party Show”. Yeah, the fangirls are more than enthusiastic~

Tom Hiddleston and Mark Gatiss get noms for Coriolanus at the Olivier Awards! Congrats, my boys! Hiddles has tough competition in Jude Law and Rory Kinner~

OMG! BBC America will show The Real History of Science Fiction, a four-part series on well… the history of science ciction in literature, film and TV. It will premiere on April 19th and the first show will be about Robots, then the second about Space (April 26), then Invasion  (May 3) and finally Time (May 11). And OMG the people who will be in this documentary! We will have William Shatner, Nathan Fillion, Zoe Saldana, Steven Moffat, David Tennant, Christopher Lloyd, John Carpenter, Karen Gillan, Neil Gaiman, Nichelle Nichols, Peter Weller and many more! 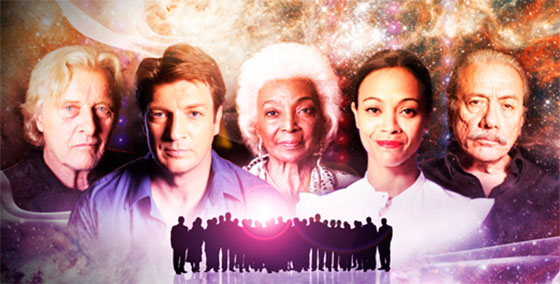 Talking about sci-fi and Karen Gillan, she talks about Guardians of the Galaxy, and seems very happy with it and with her character Nebula. Also, we should be looking forward with her figth scene with Zoe Saldana’s Gamora.

Yeah, there’s a big girlie fight sequence, but it’s not that girlie. They made sure to make sure there was no like, any nice pirouettes or anything like that. […] [Saldana’s] really experienced in the physical stuff and she was a ballerina so she’s really amazing at all of that stuff. She barely required any rehearsal, she was like, ‘I can do this.’ I required two months of rehearsals every day that I wasn’t shooting, because I looked like spaghetti when I started. […] This is the integral one for my character, because it’s not just a physical battle. Their relationship goes very deep, and there’s a huge history between them. So there’s a lot more to it than just the physical.

Some lucky bastards already saw Captain America: The Winter Soldier and the twitter reactions are damn great! It seems to be plotty AND action packed!

Also, the two after credit scenes (well, one mid-credit and another after credits) of Captain America: The Winter Soldier have been revealed. No images yet, but full descriptions in here. One if related to Avengers: Age of Ultron, and the other what might come later in a future Captain America movie.

And to end this Captain America: The Winter Soldier section, here is some pretty concept art~ 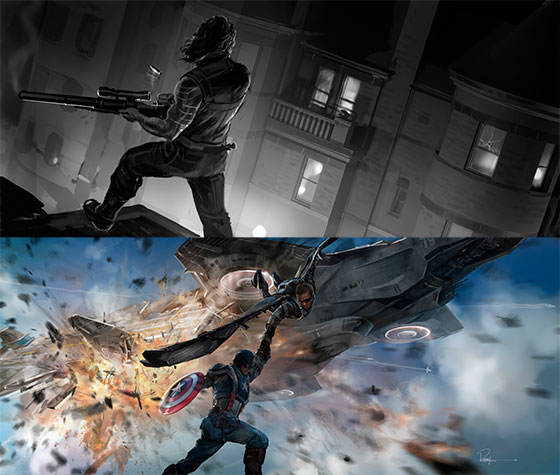 Chris Hemsworth was at the Wizard World Comic Con in California, and took part in an open Q&A where he talked about Avengers: Age of Ultron and praised the script and Joss Whedon.

Everything in [Age of Ultron] is ramped up though. It kind of blew me away reading [the script]. I don’t know how Joss [Whedon] does it, but everyone has gone up another notch and the whole thing is bigger and more exciting and crazier. Yeah, he’s a genius.

David S. Goyer talked about the Constantine TV series and was happy to show tell that it will be much closer to the comic-book than the movie. Which is not a difficult task anyway… Also, we will have “other characters from the comic books and possibly from the DC universe”.

I’m proud to say that Constantine is actually being played by a British guy. Matt Ryan and he is going to have blond hair. […] He will have his signature trench coat and skinny tie. I would say that the show clings more closely to the source material then the film did. Even though the film was interesting.

Talking about staying true to the comics, that’s exactly what Evan Goldberg wants to do with the TV series about comic-book Preacher.

We just had a meeting with AMC and Garth Ennis, who’s the writer, and we all kind of seemed to agree that we’re gonna stay as true to the comic as we can. We need to change some stuff but we’re not gonna change much, I hope. We’re just gonna do a little more of the preamble instead of doing flashbacks and restructure how we dole out the information a little, but we’re gonna [do the] same characters, same story, same ending. We’re gonna try to stick to Preacher as best we can.

And to end the day, here are some new promo pics of the upcoming Rurouni Kenshin live-action sequels! 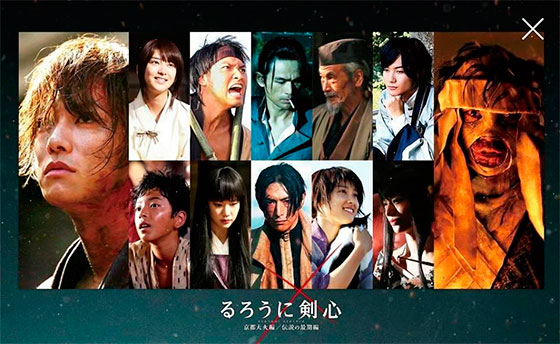