The Fangirly Diary of a Geek Girl: Batman will be BATMAN!

A day ago, there was a disturbance in the geekdom, and it was because The Batman director, Matt Reeves, basically said that the film “isn’t part of the [DC] extended universe” during a podcast. Then again, that podcast was recorded prior to Warner’s SDCC presentation where The Batman was officially included in the upcoming DC films slate. Thankfully, the drama didn’t last long and Reeves himself clarified his words via twitter! So yes, we must all calm our literal and/or figurative tits!

Just to be clear: Of COURSE Batman will be part of the D.C. Universe. Batman will be BATMAN. In my comments from a while back about not being part of the DCEU, I was talking about The Batman being a story specifically about Batman, not about the others in the Universe. That it wouldn’t be filled with cameos servicing other stories — that it would be a BATMAN story.

Here’s a sneak peek of Batman: Gotham by Gaslight, DC’s next animated film via Warner. Yeah, it’s the one where Batman faces off Jack the Ripper, and is considered the first of the “Elseworlds” stories, where DC characters are shown in alternate timelines or realities. No official release date yet!

Here’s the trailer for BoJack Horseman Season 4! Bojack is missing and Diane provides updates on every non-BoJack character! And this one does have a release date: September 8th~

EW regaled us with three Outlander covers! Two of them will feature Caitriona Balfe (Claire Randall Fraser) and Sam Heughan (Jamie Fraser) individually, and are available to subscribers and on newsstands. The third, showing them together, will be available exclusively at Barnes & Noble beginning on August 29! EW algo shared 10 lovely pictures of their cover photoshoot, and some stills from season 3!

Here’s a teaser of Black Mirror season 4 that basically reveal the titles and cast of its 6 episodes: “Crocodile”, “Arkangel”, “Hang the DJ”, “USS Callister”, “Metalhead” and “Black Museum”. Also, Jodie Foster is directing the “Arkangel” one!

Rumor had it that the Joker and Harley Quinn movie was replacing Gotham City Sirens. But nope, seems, Gotham City Sirens has just been delayed and not cancelled. But, will David Ayer still involved in the film? Only time will tell!
–

And that’s it for the week. Before I go, I want to wish Happy Birthday to Amy Adams, Andrew Garfield, Carrie-Anne Moss, Richard Armitage, Rupert Grint, Ava DuVernay, Takashi Miike and Tim Burton. 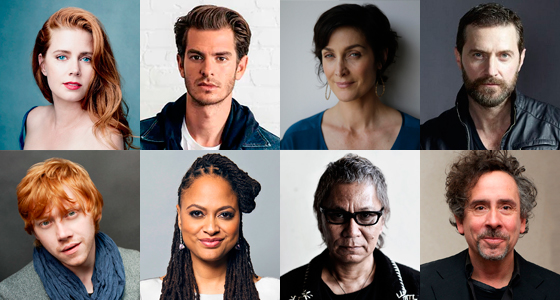