Tom Hiddleston is the first Hero of the Year for MTV! That is an individual “who made a major impact on the comic book movie community in 2012”. Yup, Hiddles, you are one of us now, you big geek! Also in the link you can see the famous Loki’d video~

Samuel L. Jackson confirms Nick Fury will have a decent role in Captain America: The Winter Soldier, similar to the one he played in Iron Man 2… that is, not just a cameo.

News on Sherlock Holmes 3: they are writing a script! And waiting for RDJ to finish working on Iron Man 3. OMG! RDJ and Jude Law will be all bromantic in Victorian clothes again! Woohoo! 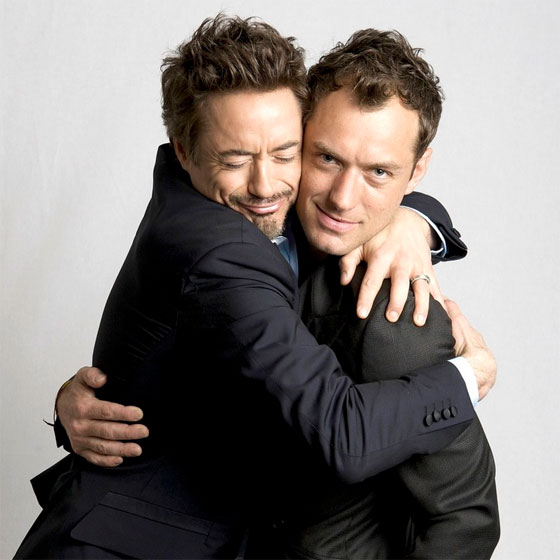 I miss their press together~

Jackie Chan would be in Expendables 3 and homeboy ain’t doing a cameo!

Sly had invited me to be in Expendables 2, but I was too busy filming CZ12 and couldn’t make a commitment to the film. But he did extend his invitation to the third movie, which I agreed on the condition that I will be appearing as more than just a minor role with a few scenes.

Dammit, Tarantino could have made a Luke Cage film eons ago! Alas, it was not meant to be~

After Reservoir Dogs. I had considered doing a “Luke Cage, Hero for Hire” movie. [Producer] Ed Pressman owned the rights at that time, and we talked about it. I talked to Larry Fish [Laurence Fishburne] about being Luke Cage, and he really liked that idea. Then I ended up writing Pulp Fiction.

Jamie Foxx talked a bit about what Electro’s costume might look like in The Amazing Spider-man sequel:

Ok, we got it. No green and yellow for you.

So, remember the pink covers Marvel did for Cancer Awareness Month? It doesn’t stop there. Apparently Marvel will have one of the heroines get the awful disease… Yep, this comic could be very good or very bad, depending on how it’s handled.

Wooo! Another Doctor Who prequel of the Christmas episode. A “minisode”, as they call them.

I found it full of lulz~