First, let’s have the bad thing out the way first… remember that ridiculous “nuking the fridge” moment on Indiana Jones And The Kingdom Of The Crystal Skull? Steven Spielberg admitted it was his idea… and than it sucked~

I know in Indy 4, you didn’t buy the refrigerator and the atomic bomb. I know! I know! But we tried. We tried! I was pushing the envelope… By the way, I take full responsibility for that. That was completely my idea. Even Harrison said to me, ‘nobody is going to buy this!’

Now the good! Captain America: The Winter Soldier new trailer is here! Here some very pretty screenshots! Also, here are 10 must-see moments and 22 things we learned from the trailer. Yes, we geeks overthink everything. Deal with it.

Also, Captain America: The Winter Soldier will be somehow connected to Agents of S.H.I.E.L.D. That’s a smart move, actually. Of all the Phase 2 movies, this one is the one who made more sense if you wanted to do something like that.

Schmoes Know continue delivering the (possible) exclusives! Paul Rudd and Rashida Jones could be Ant-Man and The Wasp (or rather Hank Pym and Janet Van Dyne) in Ant-Man movie! Well, I guess this movie will indeed be more comedic. Well, I gotta say they do look good together~ OMG! Loki will not only be bisexual, but gender fluid, on Loki: Agent of Asgard. Writer Al Ewing confirmed it on his Tumblr!

Loki is bi and I’ll be touching on that. He’ll shift between genders occasionally as well.

OMG yes! “Day Of The Doctor” gets Latin American cinema screenings. More importantly, it will screen on my country! I will wait until the local Cinemark makes an official announcement to flail like Kermit though~

Kevin Feige talks about the rumors surrounding MCU. So, it is official, Hank Pym won’t be in The Avengers: Age of Ultron, so Ultron’s origin story will be different. Damn, I was expecting him as Pym if not Ant-Man.

Here are some pictures from X-Men: Days of Future Past from two different sources! 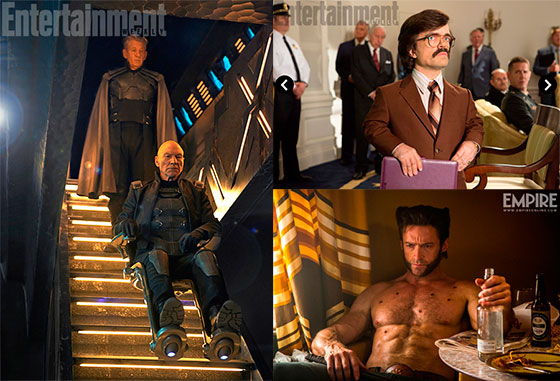 Guillermo del Toro’s Crimson Peak has a tentative premiere date of April 2015. And here’s what Tom Hiddleston had to say about the script (and Guillermo), that loveable wuss~

Guillermo’s an absolute omniscient about that particular genre of fiction, in literature, in cinema… His precision and passion… The script itself is bone chillingly terrifying. When I was reading it for the first time I had to get up and walk around the room, then sit down again because I was so scared. But it’s also so sophisticated. It’s actually a very mature film.

Talking about scary things, Clive Barker plans to write the script of a new Hellraiser film. And it will be a remake of the original 1987 movie, based on novella The Hellbound Heart! And he wants Doug Bradley back as Pinhead! Oh wow. I am actually interested~

–
And that it’s for the week. Before I go, Happy Birthday to Michael Gambon, Viggo Mortensen, Andrew Scott, Carrie Fisher, Jeff Goldblum and Ang Lee!