Ohai Peter Capaldi and Jenna Coleman in the very first real still of Doctor Who series 8! And yep, it is from the premiere episode, titled “Deep Breath”. 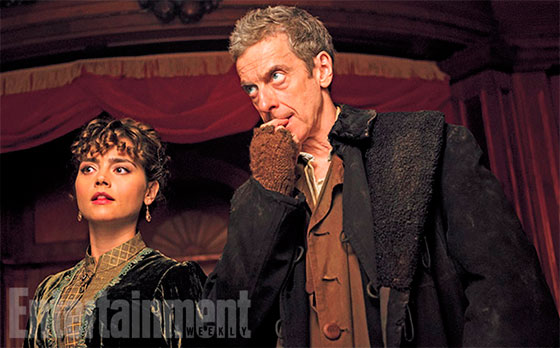 It’s a big introduction—he’s the new Doctor. There’s no point pretending that it’s not the most interesting, dynamic thing that you’ve got to sell in that first episode. It’s going to be about ‘What’s he like? How’s he different?’ I suppose it feels a bit like a character piece, but there’s plenty of action and nonsense and jeopardy, as there ever is in Doctor Who.

Here are the Emmy Awards Nominations! Congrats to all who got a nom! Sorry for those snubbed! And here are the Brits representing!

Guillermo del Toro speaks about what he hopes for the Pacific Rim animated series. In a nutshell? Long arcs! That’s awesome! My fav stuff has always been long arcs!

I don’t want it to be like Chapter One is a little action thing and it gets resolved in 40 minutes or an hour and then the next episode, [it’s like] nothing happened. My favorite anime series always have a long arc.

On more Guardians of the Galaxy news, James Gunn kinda doesn’t want cameos of his babies in other Marvel movies. He’s an overprotective mother hen~

Even if your kid is dating a totally nice person, they have to get your child. It’s the same with cameos, you have to make sure whoever is writing and directing those movies really understands Rocket and Groot and aren’t just using them as a cheap ploy for people to show up at the theater.

And that thing about Easter eggs? He totally confirms it.

And now it’s time for SDCC news! Here are the schedules of Thursday and Friday events! We have stuff about Batman’s 75 anniversary, Star Wars Rebels, Big Hero 6, Dreamworks Animation (and we might have Benedict Cumberbatch there to promote Penguins of Madagascar), and the smaller Marvel panel for Thursday; and we have awesome TV series panels with Agents of S.H.I.E.L.D., Agent Carter, Arrow, Game of Thrones, The Walking Dead and Legend of Korra: Book 3 on Friday!

DC are bringing their A-game as far as their TV shows are concerned! Check out this spiffy covers of TV Guide’s SDCC special! Though to be honest, I only really care about Constantine and Gotham. But I will keep checking Arrow and will check The Flash too!

I expect in the DC TV series panel, they will talk about the last-minute changes in Constantine. You see, now instead of new character Liv, we will get actual comic-book character Zed. Guess they didn’t want to creepy the audience when Liv inevitably becomes either a will-they-wont-they character or a plain love interest, and decided to replace her with a more experienced/powerful woman who is actually a canon love interest (for a while).

On Marvel’s side of things. They will be back at Hall H (where the magical moment of Tom Hiddleston as Loki happened)! And that’s all they are saying for now~ Teasing bastards!

Finally, on bad Roberto Orci news~ Dude said himself that he ain’t confirmed as the Star Trek 3 director yet! Does that mean we could get another one? One with actual directing experience and love for the franchise? He also said he is not officially involved in The Amazing Spider-Man 3. But that was something many of us assumed. I really hope that franchise can rise (or got back to Marvel).