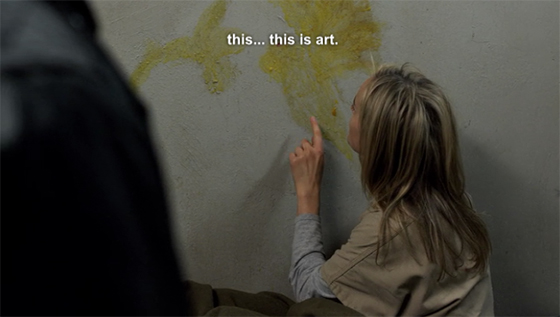 “This…this is art. This is a yellow warbler drinking out of a daffodil. She just cannot get enough. I’m calling it Thirsty Bird.”
“That warbler looks like the yellow Angry Bird.”

It’s funny awakening from a long nap and feeling like you’ve been snatched out of your comfort zone entirely, and that’s exactly what happens when Orange is the New Black enters our lives again — with an episode directed by Jodie Foster. It’s here we meet Piper again, smack out of SHU, thrown into something she has no idea about; forced to board a bus, then a plane, and then into a whole new surrounding in Chicago. It’s a smart move on writer/creator Jenji Kohan’s part, because it pushes into question whether or not we’ll ever see our beloved family again (even those of us who have kept up with any production stills and videos of Uzo Aduba and Danielle Brooks reenacting the best Scandal scenes).

Because of its structure, the episode is lacking in a lot of the things that viewers love most; basically, every character that isn’t Piper (or Alex). As much as Piper is at the center of the series, this is primarily a show about the shared and individual experiences about all of the women within the prison (and their back stories are often the most fascinating part of the series as a whole). But Kohan realizes this and works it to her advantage. Piper may not be a perfect character, but she can be an interesting one when she’s pushed into rough, emotionally challenging situations.

In fact, it’s Jodie Foster who exploits this the best, making the best use of Taylor Schilling’s acting skills even before the episode hits its halfway mark. Around fourteen minutes in, stuffed like anchovies into a plane to Who Knows Where (Chicago, as we later discover) Kerman starts delivering a lengthy monologue about her final experiences in season one. The camera is solely focused on her; it slowly goes from the left side of her face, the passenger on her right almost entirely in frame, to the opposite side. She begins with some minor voice cracking and ends by breaking down into tears and snot in the span of a couple of minutes. “I did something kind of bad… and I was doing my time for it. And then I did this, uh, I did this other thing. I did this really, really bad thing and I think maybe I’m going away for it for a long time.” She goes on from there, and it’s arguably one of the first times that the effects of prison on Piper are shown in full force. It’s impossible for the woman sitting next to her to console her because she doesn’t know what she’s been through. For all we know, her bad deed was simply fucking up some taxes, hiding some money, nobody fucking knows. 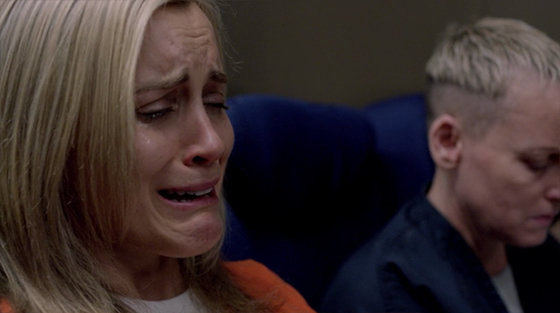 And that’s part of the point of why Orange is the New Black works so damn well. We’re introduced to characters with no back story, but because of season one’s flashback heavy structure, we’ve been trained to wonder what exactly has brought these women to these moments. But, at the end of the day, Piper is still kind of an idiot — even in her new joint in Chicago where no one’s willing to take her shit. It’s here that we sort of fall back into the typical patterns of the series, and where the line between genius set up for an episode and rehashing old tricks starts to blur. Once Piper arrives at her new locale, she’s treated to sort of the same power dynamics as Litchfield, with less tampon sandwiches, less initial kindness from all angles, and less willingness to put up with her bullshit.

The comedy, however, is still provided in abundance. There’s Piper’s new roommates, for example: a bundle of cockroach racing inmates whose prized cigarette trafficker Yoda has just been stepped on by the new girl. If anything, the stand out of the bunch is the too-friendly, entirely unbalanced Mazall. She’s an inmate who desperately wants to know about her date and time of birth for the sake of some sort-of-terrifying/sort-of-hilarious horoscope thing. One of the others shits four times a day, and is one of the bunch harassing her to find a new cockroach for trafficking purposes. Even in this new situation. Piper manages to be as completely ridiculous as usual. As one of her roommates aptly tells her, “You fuckin’ weird.”

Whether it’s a harsher experience for the audience or Piper herself is debatable really, as we get off with a jarring episode and Piper gets by again with her typical attitude towards the world. When that little bit of hope fails, cynicism and attitude prevails — something that only builds even further over the upcoming episodes. The pliability that her flashbacks (entirely comprised of Piper having to lie and watching others lie about her father’s affair) have instilled in her is immediately disposed of, as betrayal by Alex — the sole person she can trust in this unfamiliar place — takes a heavy toll on her. Why be nice when you could comfortably slide into the same role that those who constantly fuck you over choose to inhabit?

With “Thirsty Bird,” Kohan and Foster offer the season a smart start, even if the back-half of the episode isn’t as strong as the way it kicks off. It’s not an episode everyone will love, but it’s essential for sealing another chapter of the Piper/Alex story, and reminding us that Piper’s privilege only stretches so far. Her grasps for power only work within Litchfield because she has the luxury of having begun as a friendly (and white) face in a not-so-restrictive locale full of decent inmates and idiots who can barely manage a prison full of women. When she’s thrown into the real world, she has to work that desperation to new levels, whether that means catching cockroaches between two and four inches of length or giving her four day worn panties to a man she believes is a rapist.