NHK scouts the web for clips, but we can’t help but talk about the Kouhaku~

Another year has gone by, another night full of Pop, Enka, some Rock and some odd ones out — I’m looking at you, Hiroshi Hikawa and your Mariachi Passion (情熱のマリアッチ)[1, not actual clip of his Kouhaku performance].

On a really long night — or long early morning, depending on where you were — NHK held their traditional Kouhaku Uta Gassen (紅白歌合戦) event, already in its 62nd edition. What was awesome about the 2011 line-up besides Shiina Ringo [1], Ayaka [1] and the always ADORABLE Ashida Mana — who, by the way, had a little accident when she excitedly entered the stage alongside Mickey Mouse, of course! 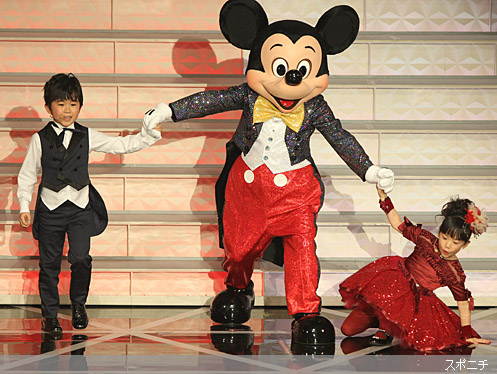 Did you have enough cuteness there?

Okay, what was also cool about the latest line-up was that it not only had one or two Kpop acts, but THREE! KARA shook their booties, SNSD showed their long limbs and DBSK were there to pump some energy. 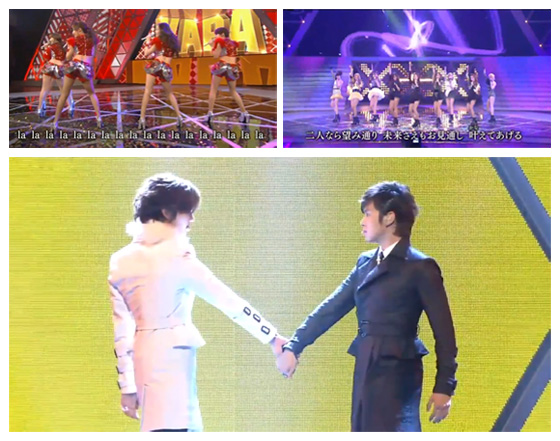 Obviously, NHK — as it is — is hunting down any of its property in the usual suspect sites: YouTube, Vimeo and DailyMotion. So, embedding any of the performances is going to be a problem, as it always is with Japanese media. To make it even more impossible to share Japanese music, most of the Enka or more traditional numbers at the show are not even making their rounds on the webverse in fan accounts because apparently there aren’t any web-savvy Enka-lovers out there to share those performances.

Some surprising music combinations were Enka singer Miyuki Kawanaka (川中美幸) backed by multitudinous girl group AKB48 [Youku], as well as a super power performance by Enka singer Ayako Fuji (藤あや子)  alongside boyband — or manband — TOKIO, who recreated an o-Matsuri lifting of the spirits feeling in their performance of Ayako no o-Kuni Jiman Dayo ~ Ganbarona Tohoku!! Kouhaku Special ~ (あや子のお国自慢だよ～がんばろな東北！！紅白スペシャル～) — something like: Ayako’s country is a proud one ~ Do your best Tohoku!. [1, complete non-Kouhaku version]

NHK is ruthless with its copyright, it hasn’t let me keep any of the videos 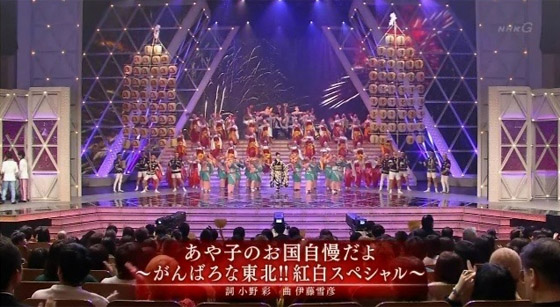 However, my most favorite and most memorable of the night — and probably most surprising pick — was when Ashida Mana and Suzuki Fuku were performing their hit Maru Maru Mori Mori! (マル・マル・モリ・モリ!) and then introduced Mickey Mouse to join the stage with Arashi and perform the Japanese version of Disney’s classic It’s a Small World —  Chiisana Sekai (小さな世界) in Japanese. 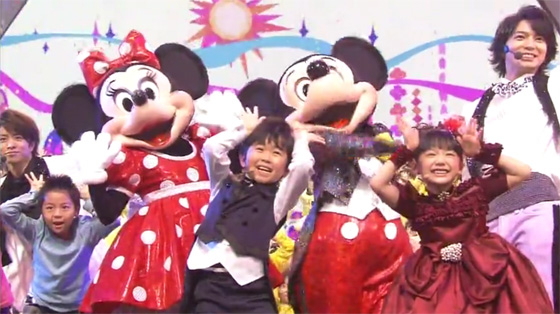 It’s been obviously really hard for me to look for an easy access link to this performance, but you’re in LUCK! I did find one over at Korean-based Nate.com. — A YinYueTai version is also available.

There was just too much awesome not to pick it the best of the night.

In the end the Red Team (girls) won, breaking the White Team (boys) reign for the last few couple of years. I was surprised at the difference in voting between the “judges” — which I’m pretty sure included the on-site audience too — the Digital TV voters and the Mobile voters. Without the latter two, the White Team would have swept the votes, — I’m guessing many of them would have been fans of all the JE groups that were in the White Team (Arashi as host, TOKIO, NYC and SMAP just to name those few).

Overall, I think this has been the most entertaining Kouhaku performance in years. Thoughts?