My Kdrama Obsession: The Moon That Embraces The Sun

So, I was really excited for The Moon That Embraces The Sun because of Kim Soo Hyun, but I was also excited because of the premise:  It’s a historical drama in which Soo Hyun plays the king of Korea during the Joseon era. There are some “spiritual” elements as well as fated loves. I was pretty much sold at the whole “Soo Hyun playing a historical king” — I just have a THING about historical dramas. 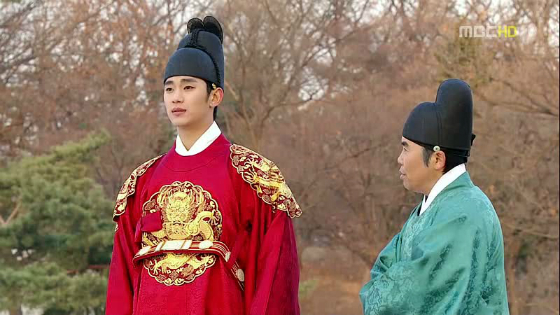 Can you blame me? He looks so good in royal robes.

But, I wasn’t expecting how much I was going to fall in love with this drama from the get go. We start off with the backstory and continue to the current story in which crown-prince Lee Hwon (Yeo Jin Goo/Kim Soo Hyun) falls in love with Woo Heo Yeo (Kim Yoo Jung/Han Ga In). This is no easy love story. Lee Hwon is the crown-prince of Korea and many politics lay behind his choice of a bride. Add to this a power-hungry grandmother queen, a bastard big brother born from a concubine, loads of corrupt politicians, a fate tainted with blood and the inability to be able to live as you choose. Our young lovers are joined by fate but separated by force. It’s a well-known story, yet there’s much to chew on in this drama. From the acting to the characters, I was sold. But what really made me fall deep, what made me so nuts, was the young cast.

First of all, the casting is really amazing – Yeo Jin Goo looks like a mini Kim Soo Hyun and is as amazing when it comes to acting. I was truly blown away. Then Kim Yoo Jung is an admirable girl. I feel that she did great with the role of Woo Heo Yeo. Then we have Im Siwan, Lee Min Ho (not to be confused with the older, more popular one) and Lee Won Gun. They pretty much established a great foundation for the drama. I was so sad to see the young cast go after the sixth episode. As much as I love Soo Hyun, Goo Jin was really mesmerizing. I don’t want to give away the drama, but there’s this scene in which the character of Lee Hwon breaks down out of sorrow. The way Goo Jin cried… what a performance.

The kids really did such an amazing job that I kind of did not want to see the adult cast take over. Also, as was the case with Yeo Goo Jin and Kim Soo Hyun — the casting was done to perfection, they look so much alike — other characters went through the same transformation. Sadly, not all of them did and that bothers me a little. They should have let Jung Il Woo (from Flower Boy Ramyun Shop and 49 Days) play the older version of Im Siwan (as Heom Yeom) because they look most alike.

I am a still miffed about the casting issue, but when you do only some of it admirably and not the rest… I digress.