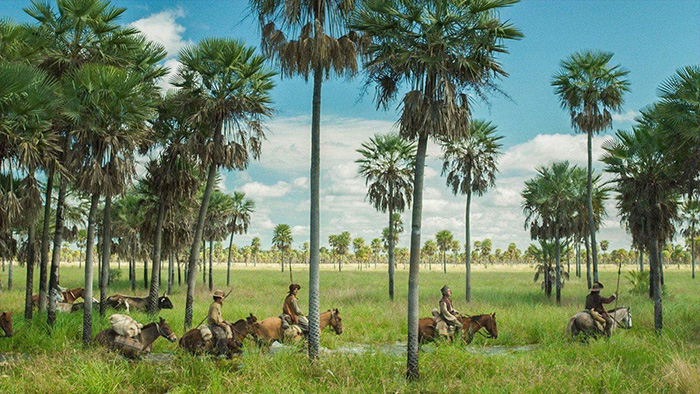 One audience member noted how she felt enveloped by the environment of the film, how it felt three-dimensional in comparison to the “flat” background in other films. Martel replied that she does not treat nature and urban spaces differently, and does not stage or frame a space differently just because one is natural and one is man-made. There is no pristine and innocent nature, even in this tale of colonial folly in the jungle. All the surroundings feel like a character. Some of the Chaco wildlife, like frogs, were recorded because their natural sounds seem electronic to human ears, playing with perception. The only on-screen light seems to come from the relentless sun, never from any period film-friendly candles or torches. Everything holds together through impeccable timing, aided within the frame by cinematographer Rui Poças (Tabu), within the audio by sound designer Guido Berenblum (who worked on all Martel’s previous films), and through the montage by editors Miguel Schverdfinger and Karen Harley.

This is one demonstration, from the technical moviemaking side, of a key point underlying Martel’s work: Reality is constructed, and everything in life conspires against this realization. Characters in Zama strive to maintain differing illusions of sovereignty, for instance. Filmmakers working in the present or any previous era decide how to represent a time and place, how to represent how people live or lived.

For this period setting, Martel adapted di Benedetto’s novel with the addition of presenting indigenous and African slave characters with individual moments of rebellion, of not submitting to colonial hierarchy. This is while knowing these characters were not recognized as equal citizens, knowing how history negated (and can continue to negate) the humanity and even existence of these people. Martel sought a way to move past “one’s stupidity,” and the usual Western handling of portraying characters of different groups and classes. To avoid this tradition of misrepresentation, Martel made sure to talk with every single person involved in the production, to listen to their thoughts about the production. She knows every face in every frame, and even met some of the actors’ families.

Casting in the Chaco region made this commitment more difficult, since it is the poorest province in Argentina. Driving equipment-laden crew vans on run-down dirt streets made the disparity obvious at their entrance. There was little in common or to identify with, until Martel realized that they could speak on equal ground about dreams. Dreams were a place to begin their collaborative conversations. Also, actors didn’t have to be cast strictly as their own people, so that people wouldn’t be stuck in portraying the same problems. According to Martel, if white actors can portray a variety of roles from different places, indigenous actors should have the same freedom as well.

Due to Argentine history, there are very few descendants of African slaves left in the country, and they reportedly do not look the same as their ancestors. So the characters of African descent are mostly portrayed by Haitian and Senegalese actors with their own, present-day accents. The production didn’t “correct” any accent for an idea of historical accuracy, focusing instead on authenticity to story and situation. Every aspect of the period may not have unfolded quite like Zama presents it, but being alive in those times might have felt like this.

Martel’s films are uncontained by previous notions of narrative, unsubdued by what she calls “the madness of plot,” or an easily-explicable plot that can be reduced to a five-minute summary. People in charge of films think that the audience only wants everything explained and plotted in neat sequence. However, story is only one part of experiencing life. Though Martel doesn’t mind that genres like superhero movies exist – she even mentions that she enjoys watching the adventures of Spider-man – she stresses that these and other mainstream/blockbuster/plot-focused stories cannot be the only movies out there. Audiences are sensible and intelligent, and experienced. They are not supported, Martel feels, by the current state of cinema. Audiences need the opportunity to discover more films, more types of films, and more of the experiences those films offer.

Martel also had a question for the audience: When we read, whose voice reads the words? It’s not in the world, not in the air, but somewhere inside your head. Does it speak in your voice, or in other voices? (She also noticed that this could also be the basis for an interesting horror premise.) When we read words, we produce our own images and soundtrack and other sensory aspects. This production is very close to movies, yet its own medium. All of this we produce is not the plot. The plot lies in the words, but they have generated an exploration in your mind. Films with less plot, regardless of quality, allow the audience more time to think, at least within the viewing. (I feel this differs from theorizing about plot-heavy films and television. For the latter, viewers become inspectors; our speculation insists on explaining rather than exploring.) We should show the same patience for films that we have for people and other aspects of life.

Cinema is created through many peoples’ choices of how to reflect life and experience, how to represent features of reality. Martel’s continuing work and commentary inspires viewers to view not just a film itself, but the context and the decisions behind it. She wants to make films the audience will remember and ponder about the days afterward, to evoke thoughts that can be shared and can generate new thoughts.

Zama concludes with a question spoken in Spanish: “Do you want to live?”  Then the speaker continues to talk, in an indigenous and unsubtitled language. It’s best to watch Zama as a viewer not trying to subdue each event into strict logic, especially since the circumstances and actions of Zama’s (or any) time were not objectively logical either. Lucrecia Martel says communication is most important, in art and in our own interactions. One does not need to understand every single word and image to communicate. Like Zama, we hope for a response.