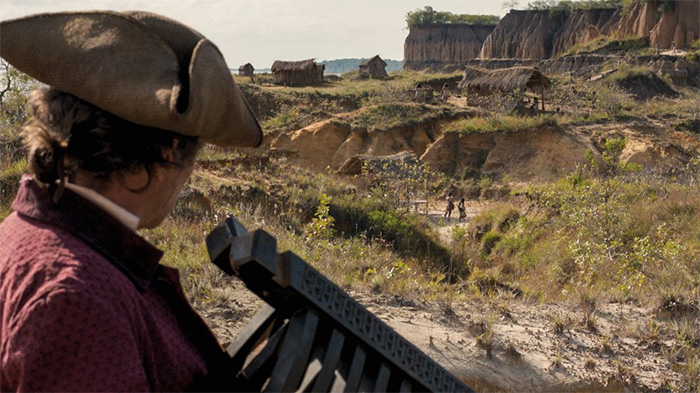 Don Diego de Zama (Giménez Cacho) hears the hisses of unseen animals, the shouts of kids playing somewhere in the distance, the coursing of a body of water running alongside his bewildered footsteps in the sand. Then he hears laughs off-screen.

Zama, which adapts Antonio di Benedetto’s “unfilmable” 1956 novel, follows the titular character, a criollo magistrate in 1700’s South America. The Spanish crown has assigned him to a sleepy, remote town which he is eternally trying to escape. Writer and director Lucrecia Martel cuts and alters various characters and situations to focus on the source’s existential character. Another change moved Zama’s longed-for capital outpost of Asuncion, in Paraguay, to Lerma; an Argentine city in the Salta region where Martel hails from and has set her previous movies.

As the film continues, Zama spies on others, and we witness the results of his spying. Though he is first chased and teased, his punishing slaps back remind of his colonial power, and of how he treats those he deems below him. The shot framing sits behind his body, so that his back covers the violent act, but this does not hide the incident from the audience.

Colonizers are presented with parody but never caricature, drawn with dimension but never excused with empathy. While Zama tries to impose his will on others to turn them into inferior objects, he cannot use this will to extract himself from his own situation. The ethics and mechanics of empire are scrutinized with a wry eye, punctuated with the frustrating formality of wearing white wigs in the jungle. Those of European blood try to subdue what mocks them, or what they cannot understand, sometimes past the point of futility. Identity, names, status and states of mind flit about, sometimes into frenzy.

Ukelele plays over a fish swimming in water during the title sequence, one of the many symbols immersed within the film’s flow. An early display of mud on skin is both figurative and literal foreshadowing of events to come. World-building, embellishing details will strike back with narrative force. Eerie messages slide into the course of events — are they supernatural portents, or words in Zama’s head spoken back to him? A close third-person perspective conducts this suffocating, visceral atmosphere. Each scene brims with background activity, but never strays far from its protagonist. What surprises the audience often startles Zama as well.

In the corners we glimpse the secrets of women; their own individuality, consciousness and personal worlds. Independent-minded noblewoman Luciana Piñares de Luenga (Dueñas) whispers her prejudices between smiles. The mute slave woman Kalema (Mariana Nunes) has recently purchased her freedom, and find ways to playing tricks on the ruling class. Zama has fathered an infant with Guaraní woman Emilia (Maria Etelvina Peredez), but she keeps to her own life and even shouts, “I am not your wife!” We become aware of these women’s problems, even discovering the alarming scars of attack. Yet that particular moment soon shifts as Zama becomes confused and redraws attention to himself, casting a young woman’s worry aside to discover what he has missed and how it could affect him.

The director herself was present at the screening I attended at the Yerba Buena Center for the Arts (YBCA). Martel was a warm, personable, and insightful guest. She hoped that with the increasing attention on her work, more audiences realize that she views her films as comedies. Not straight-up farces, or within any other pure comedic mode looking for laughs; but within the realm of comedy, of looking at the world askew. Martel even told Criterion to preface their release of La Ciénaga (The Swamp) with, “This is a comedy.” Zama’s structure is a surreal comedy of existence, with humor embedded within the disorienting experience- something that Latin Americans tend to appreciate more in her films than other audiences. (Particularly hilarious: a llama that bursts into a scene, or the young writer desperate to have a first reader for his novel.) She even observed that French audiences, at least the art-house crowd that go to see her films, are the most silent and serious. This is amusing to her, especially since her previous titles sound like B-movies: The Holy Girl, The Swamp, The Headless Woman. However, Martel also remarked that retrospectives of her work and increased distribution have led to more understanding and laughter when she has the chance to listen inside the theater.