Looking for A Good Pilot 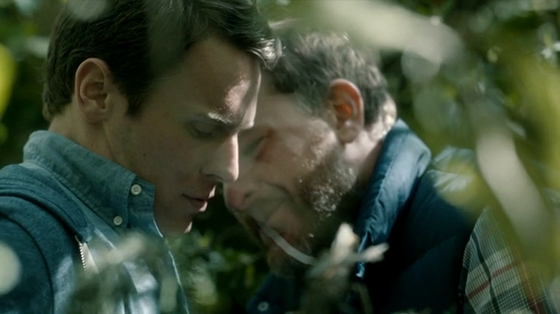 I’ll be frank. I was ready to hate Looking. I really was. A couple of months ago, nothing would have made me quite so satisfied as this show turning out to be a disaster. The way it was announced made it sound like Girls for a gay crowd. Hell, that’s actually the way it was pitched in the announcements. And yet, with every new bit of information, things started looking positive. Diversity, Andrew Haigh’s involvement, and solid reviews of the first four episodes.

Now, here I am, admitting it: Looking is a good show. Or at least a good pilot.

The episode, written by series creator Michael Lannan, opens on Jonathan Groff in the middle of a woodsy area, ready and set to hook up with a guy (as seen above). Nothing surprising here; just two dudes looking (hah! jokes!) to have some fun. Tell me if you’ve heard this one before — a guy who isn’t into kissing and just wants to get it done without talking or knowing your name. Been there, done that (or at least I have. Am I revealing too much about myself right now?). It’s the kind of situation that can be awkward as hell, as any date can (as Groff’s character later learns when a date asks him “drug and disease free?” in the most nonchalant manner), or downright pleasurable. More often than not, it’s the former. The show gets that, and it’s kind of refreshing.

And that’s why I’m thankful for Looking. It’s a show written by gay men, about gay men, for gay men, which — surprise — means it actually understands what it’s like to be a gay man. It’s frustrating to think about all the straight men who have fucked up writing gay characters (or even gay men who only utilize caricatures of gay men — looking at you, Ryan Murphy) or even the women who think all being gay means is you’ll fuck any man in sight. Sure, sex is a part of your sexuality, but that’s the thing: sex is a part of most people’s lives. The pilot includes a whole bunch of it, none of which is particularly explicit, but it showcases multiple scenarios rather than just two people getting down and dirty right after meeting. This isn’t Brokeback Mountain or your typical fanfiction. This is reality. There’s the aforementioned hook-up, followed by the couple playfully getting off in the morning (been there too), and the threesome with the tasty tattoo’d helper to Frankie J. Alvarez’s art assistant Agustín (no experience here, but oh the stories I’ve heard!).

But Looking isn’t all about sex. As cliché as it might sound, it’s about all sorts of looking (we’re going to get sick of this word soon). While Groff’s character Patrick may have opened the episode by nearly getting a no-strings-attached handjob, he’s in the market for a significant other, as well as a roommate. His ex is about to tie the knot, and as he is single, it’s dawning on him that maybe he could actually do with some settling down. Or maybe it’s just that jealous feeling of, “Well fuck, why is my ex better off than I am?” Again, a feeling that’s easy to relate to, especially after a failed OKCupid date. If anything, the only situation that feels a little unrealistic is when he conveniently meets an interested stranger (Raúl Castillo’s character Richie) on the subway without so much as a hint of wariness that the man he’s talking to might not be gay. There’s hesitation, no doubt, but more to do with a potential lack of interest than anything else.

Patrick isn’t the only gay man in the series, as the show covers a couple of other interesting characters. There’s Dom (Murray Bartlett), who works a dead-end restaurant job and would rather stay in and watch The View than go there. He’s also desperate to get laid, to the point where he’d add a psychotic ex on Facebook and hit on the new boy at work. Fun stuff, right? And then there’s the couple, Agustín and Frank (O.T. Fagbenle), prepping to move in together after who knows how long. It’s undetermined how open their relationship is, but even though there’s a clear willingness to experiment (by way of a threesome), there’s love in the way they interact and look at each other. The pilot doesn’t cover these characters nearly enough, which is a shame, but I’m sure there’s plenty more to come (insert winking smiley face here) in the future.

There’s little to complain about with the pilot of Looking, but I’ve got one big bone to pick. HBO has clearly learned that diversity is important after the backlash against Girls from the start. Yet one thing that the other show does have is someone that, you know, isn’t the perfect, athletic ideal. It is there that Looking is sorely lacking so far. Hairy men are featured and appreciated — both chest-wise and facially — but there isn’t an average or plus-sized dude in sight. And while the show addresses a certain shallowness that gay men tend to have by having Patrick critique a couple of men (including some bitter remarks about his ex’s new partner), it’s still a shame to not see anything but the same lithe gay boys we’re used to being portrayed as.

As a final word of sorts, I don’t know if I’ll go on writing about HBO’s interesting new show Looking on a weekly basis, but I do know this: I’m awaiting the next episode with great anticipation, and definitely plan on watching more. It’s rare for me to find a show about men that I can identify with, even in the smallest ways, and with a couple of improvements, Looking could be one of the best. If the series remains as good as its pilot — or hopefully even better, especially with Weekend‘s Andrew Haigh both writing and directing next week — it’ll definitely be one to keep up with.

P.S. I’m diggin’ the soundtrack, which just introduced me to the very up-my-alley duo The 2 Bears through the closing song Take A Look Around. Also nice to hear Hercules and the Love Affair (Raise Me Up was played in the bar).