iTunes: Is It Finally Time for Music of the World for the World?

This is how little I actually cared about iTunes since my Canadian credit card stopped working and iTunes Store Peru opened years ago only carrying apps for iPhone. Apparently, iTunes Peru (and other cities in Latin America) [1][2] actually works now, and has been working for over a month now.

Not only that! It freaking carries a K-Pop (and J-Pop) section — with specific sections for Baladas and Boleros, Brazilian, Contemporary Latin, French Pop, Latino, Pop Latino, among many other genres — RIGHT THERE for us all to see, instead of labeling everything non-English some broad label such as the “World Music” term is. 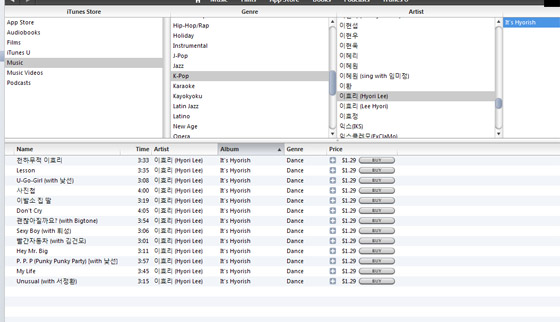 Of course, I’m a horrible person and I have already found fault with its database: Consolidation.

Now, this is me only taking into consideration everything that’s outside your regular Adele or Beyonce discography. As you can see — maybe not so clearly — from my poor screencap, Hyori’s album It’s Hyorish is listed under “Hyori Lee” while below that you can see “Lee Hyori” which lists H-Logic. And that’s without checking all the names in just hangul.

There’s also the whopping $1.29USD per track, which baffles me considering It’s Hyorish is a pretty old album. Prices aren’t standard, as other newer albums have a $0.99USD per track, so it doesn’t seem to be based on how current the tracks are like it’s supposed to be.

There’s also the lack of Neganetwork or LOEN Entertainment content — hint: I could only find Brown Eyed Girls’ My Style, and only covers of SunnyHill’s Midnight Circus [MV], but I did find this app: 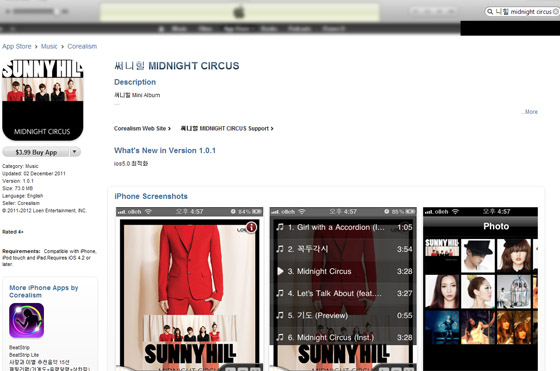