I’ve been in college for three years now. It’s had some ups and plenty of downs, but in no way has it been something I’d consider the best years of my life. Working a part-time job while trying to maintain decent grades in classes that mostly have nothing to do with what I want out of life isn’t the best anything, frankly. Hell, it’s pretty shitty, especially because I’m not the most sociable person in the universe, and most of my friends tend to be busy or just live across the country. Rather than suffer through these boring years with nothing to do, I immerse myself in movies and television, because when all is said and done, every single experience is a new adventure.

Outside of my own university, I’m also part of a well-known community college. On an almost weekly basis, with the exception of a few breaks, I’ve been going to Greendale Community College. Contrary to life at my other school, everything that has happened in Greendale has been an experience I want to relive and remember. Whether it was Spanish 101, Critical Film Studies, Epidemiology, or Remedial Chaos Theory, my classes at Greendale have taught me more than I could have ever expected.

While at Greendale, I met a group of people who really caught me by surprise. Their names were Abed, Annie, Britta, Jeff, Pierce, Shirley, and Troy. They were all pretty strange people, but something about them just caught my attention and I dedicated myself to being a part of their Spanish study group. There were some other guys who really loved the group like I did, but none of them was quite as entertaining and welcome as Greendale’s Dean Pelton. I can’t even tell you how many times I wanted to dress up along with him. 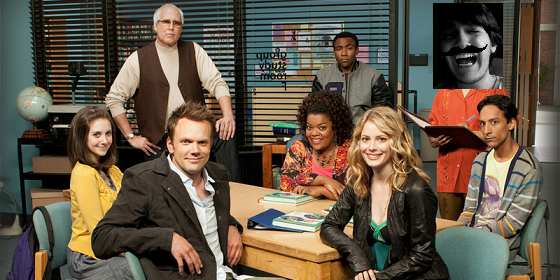 [continued on the next page]