Back in the 90s kids television shows were quite different in nature and content to its preceding two decades. I lay much of the blame for the formation of my personality on the media that I was exposed to. If I look back it’s no mystery why I have taken the paths that I have. I’m not just talking about the boom of Disney movies or its accompanying channel. 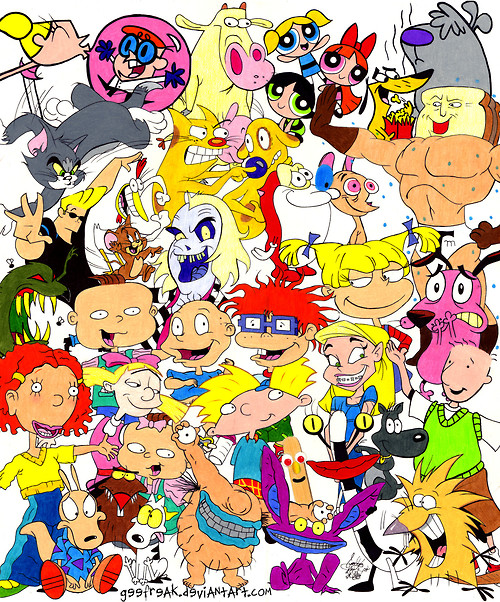 The 90s were full of fun, engaging and sometimes bizarre animation, all of which was meant for “children”. My personal favorites were mostly attached to two major networks that were born (or re-born) in the early 90s: Cartoon Network and Nickelodeon. To any American 90s brat these two names bring back flashes of some of their lazy Sunday mornings eating Captain Crunch and lounging in their PJs while mom did the laundry and dad washed his car to Gilberto Santa Rosa.

Wait, was that just me? Either way I’m sure many kids all across America will smile at the memories whether their dads jammed to Salsa or rocked to Van Halen.

Let me start with the FUN:

Who doesn’t remember the lovable Rugrats? These babies were reminding you that imagination was a powerful tool. Nothing can beat boredom like a valiant trip through the Amazon or an adrenaline filled confrontation in deep space. But don’t be fooled. The Rugrats also included a colorful cast of very disparate parents. Tommy’s parents could be considered your average American couple if it weren’t for the fact that they’re a little cuckoo. His dad was a toy inventor who couldn’t stay out of his basement, meanwhile his mother was the slapstick version of a family psychologist. Kids are running around the room talking to themselves while wearing their diapers on their heads? Don’t worry, there’s a psychology book somewhere that tells you that kind of behavior is perfectly fine for their age. I’m not even going to get into all the other anti-stereotypes that exist throughout the series like the single dad, the wealthy yet slightly dysfunctional couple and the role-reversed DeVille’s.