Devious Cherry and the Telenovela Antics

It was a simple promo on Canal Sony. In all honesty, I just saw Roselyn Sanchez and I was sold. Since Sony Entertainment Television Latin America had been producing a couple of shows — Los Caballeros las Prefieren Brutas [1] — my first thought watching the promo was that they were making a new show starring Roselyn Sanchez, Judy Reyes, Ana Ortiz and Dania Ramirez…

But as it turns out…

Basically, Cherry was producing a new show with Eva Longoria, a la Desperate Housewives but from the point of view of the maids. Apparently, ABC passed on the pilot and Lifetime picked up the show… according to the internet, Devious Maids is 13 episodes long, which is all fine and dandy for me [1][2].

After the initial doubt, I was pretty psyched to see a show in a channel that I’ve always considered predominantly white that stars Latino actresses — this has GOT to be a first, right?. I may not have watched Ugly Betty [1] religiously, but I liked Ana Ortiz in it, so I caught the first episode a couple of weeks ago.

OF COURSE, A SHOW ABOUT LATINAS AND THEY’RE MAIDS. IT’S RACIST. 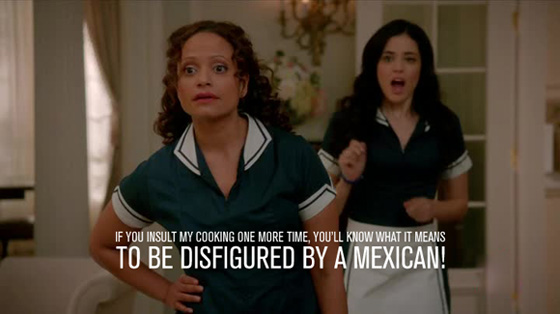 If you insult my cooking one more time, you’ll know what it means to be disfigured by a Mexican! – so Zoila (Judy Reyes) says to Susan Lucci.

Shut up. If you haven’t watched the first five episodes, you don’t know what you’re talking about. Devious Maids is really telenovela up to the degree of Marc Cherry’s style. I don’t think it’s AS good as the first season of Desperate Housewives, and they both have similarities not only style-wise but also in its basic story structure. I came for Sanchez, I’m sticking around for Judy Reyes and Ana Ortiz ;P

I was browsing Devious Maids activity online, and I’m shocked to find that EVERYONE’S favorite character are Rosie (Ramirez) and Valentina (Edy Ganem, pictured above next to Reyes) because those two are my least favorite, so I’m obviously watching this show for completely different reasons to the average viewer. I could, in fact, do without their storylines altogether because I don’t care for The Westmore Family — for which Rosie works for — they’re so far removed from the main storyline, they seem inconsequential. And I care even less for Remi Delatour, the guy for which Valentina has feelings for, but happens to work for his family alongside her mom.

Both their storylines are pretty basic telenovela stories, and if they needed a telenovela anchor… Judy Reyes’ character backstory was outstanding at breaking that ground halfway through the show. Not only that, but she makes Zoila’s relationship with Susan Lucci’s character believable… and almost touching. 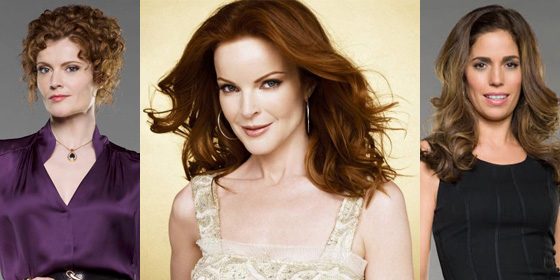 Ana Ortiz crossing Rebecca Wisocky’s storyline is like Bree Van de Kamp was split into two to make these character, and I love it. If you didn’t know, I loved Bree [1], and I thought Marcia Cross was sooooooo under-appreciated during the reigning times of Teri Hatcher and Felicity Huffman. Even though Bree was the beacon of Desperate Housewives, Susan and Lynette always took the spotlight. In Devious Maids, there’s no denying that Ortiz and Wisocky are the main focus of the show (or season).

It’s halfway through the season, and the numbers are quite steadily up. Though the show is inconsistent, I just enjoy watching it. I know you all are liking it because of Susan Lucci, but come on! Watch it because of Ortiz, Reyes and Wisocky. In the scheme of things, I’m not sure if I want the show to go on for more than 3 or 4 seasons, as it can go stale like DH did… but for the sake of giving these actresses a solid income, I guess.

Then again, I’m the sour grape that only likes one season now.

Also… Roselyn Sanchez is totally the Devious Maids version of Susan, but damn she’s charismatic. I think Susan’s character has been split into two as well with Sanchez and Ramirez… with her sanctimonious preach. And I could see Reyes’ character being a bit like Lynette… and her daughter as a bit of Gabrielle. The problem with it is that there’s too many damn characters.