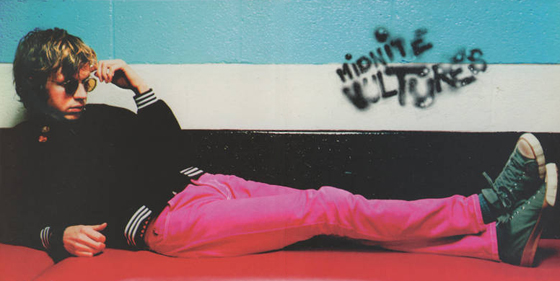 Beck’s 1999 album Midnite Vultures [Xiami] is many things. An underrated installment in the Beck Hansen discography.  One of the last great albums of the 20th century.  The first album to kick-start the 80s party renaissance that still lingers today, one that did so long before Daft Punk’s Discovery, and straight after the joyless ashes of electroclash [1] needed stamping out.

It’s also queer, queer in the sense of both sound and sex.

The whole album is sex-obsessed. Straight sex or otherwise is not totally clear, for Beck’s persona on the album is a complete subversion of masculinity. The entire record is a subversion of sexuality, in fact.

The folk troubador/surrealist rapper of Odelay is now a funk fiend looking to get lucky. I want to defy the logic of all sex laws, he pleads, before claiming I’m a full grown man, but I’m not afraid to cry. Sexx Laws [MV] is a strange mix of brass and bluegrass, and we’ve only just begun.

The next track, the noir-infused Nicotine & Gravy [MV], is definitely about a woman. Apparently her left eye is lazy, she looks so Israeli. Yet Beck’s very much in the passenger’s seat, her chauffeur, doing your laundry.

All the B-boys and all the lesbians scream on the goofy Mixed Bizness. Beck promises to be a mistress for a girl who can really do me. Being queer doesn’t necessarily mean playing the part of the opposite sex, of course, but it is a counterbalance to the heteronormative. Vultures is the sound of that counterbalance, and of all the alien freedom that it may seem to convey.

The album soon moves from sex and onto the human body itself. Get Real Paid [Xiami] speaks of a love for both the boys with the bullet proof vests and the girls with the cellophane chests.  It’s a kraftwerkian soundtrack to a dystopia of cosmetic surgery where a father looks like my mother. In the raps of Hollywood Freaks [Xiami] we hear of the guy who wish he was a lady (sic).

After the camp choir comedown of Peaches & Cream [Xiami], Beck suddenly loses the falsetto used on the preceding six tracks, declaring this is the real me ladies, you won’t find no shelter here on Broken Train [Xiami]. The mask has slipped, and the tempo’s slowed, but the lyrics suddenly paint a bleaker world of rules and control, where all the technicolor of freedom has been drained, leaving a very beige sounding track indeed.

Milk & Honey [Xiami] reverts back to the world of the all possible, where a whole world is subverted – lifeguards sleep in the street,  with Bangkok athletes in the biosphere – We all disappear… Has sexual subversion caused the whole world to lose its foundations? Is sex our biggest bedrock?

We return to the queer girl that haunts the album as a whole. In Beautiful Way [Xiami], she’s gone round the bend, in her stained raincoat.  A hurricane is blowing her way, while she looks for another crime to confess. This track is the only one on the album that doesn’t rely on electronic instruments or trickery, being a straight up folk ballad, and yet once again we see a subversion of gender norms. The Vulture persona is reactive, watching on as a proactive woman  offers to spend her money on him, clear and present danger on her trail which he’s helpless to prevent.

This is the same strange girl who’s wrestling with butcher girls in the sci-fi garage rock of Pressure Zone [Xiami]. She don’t ever change her clothes, either, apparently.

The infamous Debra [Xiami] ends the album on a jazzy sex jam tip. I wanna get with you, and your sister – I think her name’s Debra, says the Vulture, suddenly remembering he’s meant to be a playboy making his first funk LP.  But it doesn’t sound convincing, far from it, and the whole song’s more ironic than the rest of Vultures put together. Perhaps it’s meant to convey Beck’s return from the queer world back into Kansas, and he’s going at twice the speed to reclaim his masculine identity on the street.  Both girls are different from the one who Beck’s been screaming about until now. They’re just fruit that’s ripe for a pickin’ – I wanna do you like that Zankou Chicken. Food, in other words. The passive object of Beck’s reactive persona. Places have changed.  The normative has returned.  And yet, who’s really in charge? The track is all talk. He says he wants to get with Debra, but it sounds like he’s in pain, frustrated.  It’s all in future tense.

The Vulture’s lost his beak.