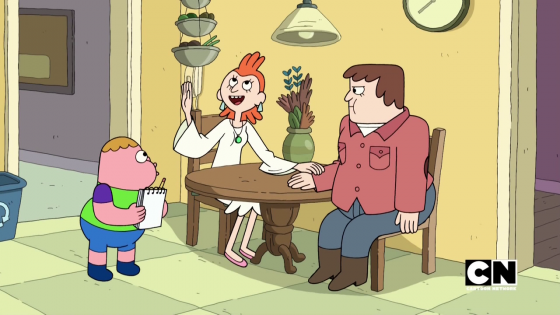 Months ago, a lot of websites dedicated some time to discussing something rather important that happened on Cartoon Network. That rather important event was the fact that one of the network’s new shows, Clarence, was supposed to feature a gay couple kissing at one point in it. They were bit characters, introduced and done away with in mere seconds, but the fact that there was a gay couple in a show for children was pretty damn great. The reason why everyone wrote about it though was simply because the folks behind the show censored the kiss between the two men, reducing it to a kiss on the cheek (which as practically every Latino knows is common practice between, well, every damn body).

As the AV Club reported in their initial article on the censoring, one of the show’s writers and soon-to-be voice of the titular character, Spencer Rothbell, commented by saying, “It’s such a minor throwaway moment but I guess it’s better than nothing.” And it definitely is a minor moment in a series that pretty much accepts all its characters for who they are, no matter the flaws we or others might perceive in them, but it’s still saying that someone out there is pushing for representation in animated shows.

But something much cooler has happened in the series that, for some strange reason, hasn’t warranted as much attention outside of social media posting.

One of the show’s three main characters, the lovable block-headed germaphobe Jeff, just happens to have two mothers. That’s right. EJ and Sue, who were introduced a month and a half ago in “Jeff Wins”, the most recent episode of Clarence, are Jeff’s mothers.  Prior to this, practically the only sign of Jeff’s mother was a note she left him in a [personal favorite]* episode, “Average Jeff”, that said, “Have a GREAT day sweetie! <3 Mom”. As adorable as that is, it’s pretty much nothing compared to the events of the most recent episode.

This episode, which premiered a full two weeks before the internet exploded from The Legend of Korra‘s finale in which two characters were subtly revealed as queer (and further explained as queer off-screen by series co-creator Mike DiMartino in a blog post), has essentially gone without much discussion. Not that I would ever want to reduce the importance of the relationship between Korra and Asami, which I was delighted to read about as soon as it happened, but this is just as progressive and important an event that seems to be getting left in the past.

And that’s a shame considering just how much importance was handed to the depiction of a gay couple as a joke mere months prior. Of course, much of that could be attributed to the fact that it was a sort-of scandalous scenario and that brings in the hits, but isn’t it even more depressing to think that the presence of an actual potentially recurring queer couple, directly related to a main character, with speaking roles, who are the focus of an episode, aren’t as newsworthy? 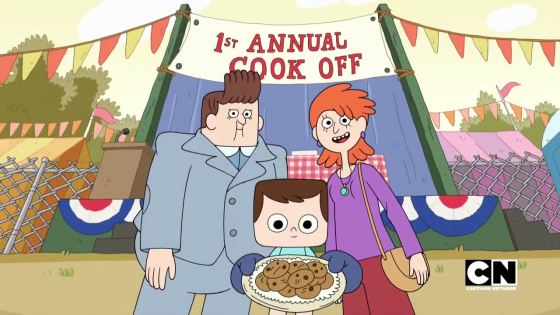 But enough about that, let’s talk about the episode itself and the way it presents EJ and Sue – voiced by comedian Tig Notaro and Orange is the New Black‘s Lea Delaria – as characters. “Jeff Wins” opens with Clarence having to step in and help Jeff’s parents when he locks himself in his bedroom because of an upcoming cook-up, one that he’s actually dropped out of four years in a row. His last four attempts are shown in a little montage in which a family photo of the bunch is presented (his mothers getting more tired of the event as time goes by) along with a freak-out by Jeff. It’s after discovering all this – and watching Jeff ruin yet another dish – that Clarence helps Jeff to create a new, ridiculously put-together dish to submit to the contest. Problem is: it’s absolutely terrible.

I won’t tell you more about what happens in the episode – although as a kids show it’s not exactly the most unpredictable thing in the world – but rather, focus a bit on what Jeff’s parents are up to in it. Outside of allowing Clarence to take over their household for some time while simply meditating next to a lava lamp, all his folks seem to do is show a genuine care for Jeff through and through. They support him every year, both with the knowledge of how terribly he reacts and with how terrible his food is this year. Hell, by the end of the episode, they straight up discuss how they don’t really care what Clarence does as long as Jeff’s happy.

Now, if we don’t include how important their presence in the show is toward representation, their presence in the episode – while still essentially main characters in it – is pretty basic and semi-limited. But, in the grand scheme of things, they’re about as present as any other parent in their first appearance (if not arguably more supportive and present than most on the series). In a way though, it’s rather refreshing to see them placed into an episode like this. It comes across more like an average family than anything else, which comes as a sort-of weird contrast to the episode itself as a whole.

It’s an episode of the show that breaks a surprising amount of the “real-life” rules it has in place, not to the extent of breaking the fourth wall, but of having musical number asides, featuring hands reaching in to hand Clarence water from off-screen, and characters not in the scene acknowledging these weird events that seemingly should happen in a fantasy of some kind. Admittedly, it’s not as grand on Clarence’s scale of ridiculousness as other episodes – take “Rough Riders Elementary” and its hypnotic chicken sauce – but it’s a different kind of off-beat and slightly self-aware humor that’s always nice to see in a kids show. 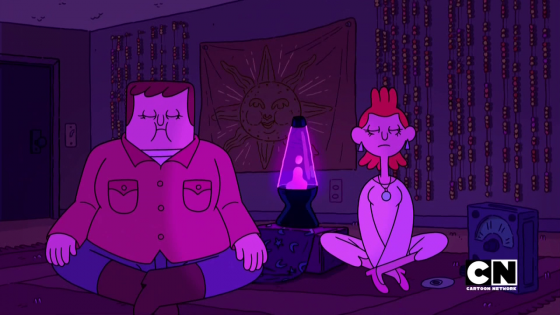 And that’s the kind of thing that makes the casual presentation of this queer parenthood even more satisfying as the episode progresses. There isn’t a single moment in the episode where they’re presented as something wacky, or as a joke. That normalcy is still a rarity on television and pretty much unheard of in an animated series directed at kids (not that my boyfriend and I haven’t greeted every episode with sheer glee).

All this being said, it certainly may be hard for some to support a show whose creator was accused of sexual harassment by multiple women in the industry. But with Cartoon Network’s handling of it, resulting in Page’s complete dismissal from the show, and the show clearly being placed in the hands of better folks, it’s well-worth giving it another chance. Since his departure, the series has only continued to grow and depict characters who aren’t just some silly kids with limited personalities. They’re characters with a surprising amount of depth to be found underneath their brash exteriors, as episodes like “Average Jeff” and “Dream Boat” depict.

It’s a series that gets overshadowed by a lot of other animated shows on Cartoon Network, especially with things like Adventure Time, Regular Show, and Steven Universe consistently at the forefront of discussion (all great shows in their own right), when it should be standing in league with those as one of the best. Clarence may look like a series about a silly chubby kid and his pals, and while it’s definitely that, it’s full of so much imagination and a genuine longing to be better than its peers, that it’s impossible to deny just what a charming, and weirdly progressive, show is actually is.

*Can you tell who my favorite character, and my favorite writer, are? Answers are Jeff and the aforementioned Rothbell.