Coming down to the wire. Here we have my films 20-6. These are absolutely the films that made the biggest impression on me throughout my horror watching journey.

Damien. That’s all I need to say to induce fear into the hearts of parents all over the world. Another in a slew of films in the ’70s and ’80s that explored the idea of evil from the cradle. The build-up to the first death was so brilliantly done that when it finally happened nobody was prepared. Oh, the title and the opening scene in the orphanage set the story, leaving a heavy blanket of foreboding over the movie as it went from scene to scene, but just how blissfully happy the family was had the effect of lulling viewers into a false sense of security. Then… everything goes to hell and you’re not quite sure if there’s going to actually be a happy ending. Most films, horror or otherwise, at least leave audiences with a small glimmer of hope. The Omen did no such thing. The very last shot of the film was so chilling ’til this day I have a fear of unexpected smiles–namely when they come after or during something sinister.

This film is one of the reasons why Miike Takashi is probably my favorite Japanese horror director, and most certainly one of the most beloved Japanese directors in general. He’s as twisted as he is brilliant. Based on the manga written and illustrated by the equally twisted Yamamoto Hideo, Ichi the Killer is brutal. Almost every single scene is filled with something that will make you want to turn away from the screen in disgust. Yet despite what many may believe to be gratuitous gore and violence, the film has a lot of soul and its own share of hilarity. Of course, that doesn’t stop the film from being utterly disturbing. I’ll admit to having to watch this one in small doses.

Okay, I’m just going to say it: I almost cried watching this film. Yes, it’s post silent films (therefore the acting isn’t stellar), and yes the cast is made up of mostly non-actors (the actual “freaks” of the film’s namesake actual carnies). But in the end everyone just wants to be loved for who they are. When one of the “normal” attractions, a German trapeze artist named Cleopatra, shows interest in the ringmaster, Hans, everyone is elated because their beloved leader has finally (seemingly) found love. Unfortunately, he’s so blinded by his love for her, he ignores the warnings of his close friend Frieda and allows Cleopatra to marry him. So when he finally finds out that she’s utterly disgusted by him and his cohorts, the sting I felt in my heart when he reacted the way he did almost outshone the ending. Almost…. Trust me when I say there’d never been anything quite that gruesome on screen before, and the build-up to it is second to none.

Choi Min-sik may low-key be my favorite Korean actor. He stars in two of my favorite Korean films, and every one of his performances gives me chills. His roll as a deranged psychopath did that and then some. The coldness in his eyes as he plays out his depravity had me watching a lot of I Saw the Devil behind my fingers. Of course, Lee Byung-hun does a great job himself of terrorizing my psyche. Never mind that he’s the victim and the good guy here, his own acts of carnage are just as horrifying as the actual psycho killer. Which makes one sit back and think who’s actually the real madman here? Korean horror is really something else. Though Japanese horror pushes and pushes and pushes while still managing to be subtle, Korean horror holds absolutely nothing back, confronting the viewer with strong images and brutal social commentary. I Saw the Devil is no exception, and in fact is one of the goriest (if not the goriest) Korean horror film I’ve ever seen.

I’ll admit to having severe nightmares after watching this. I think mainly because it was one of the earlier horror films I ever watched and it was at a time when it was en vogue to play Bloody Mary in the school bathroom. Maybe it was just in my school, but girls really loved trying to see who could last the longest with the lights off. How we didn’t get caught in there being idiots I’m not quite sure, but that meant something like Candyman hit a little closer to home than it probably should have. The imagery is as frightening as it is breathtaking. Never mind the exposed bee-covered innards of the Candyman himself (played with chilling precision by Tony Todd), the tunnel Helen (played by Virginia Madsen) walks through to get to his lair is probably one of the scarier images in the film. Yeah, this one stuck to me for quite a while afterwards. 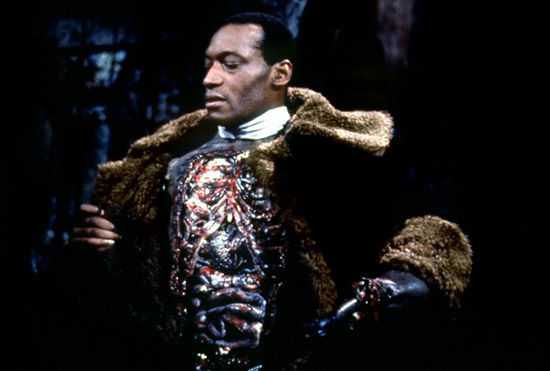