Amy’s Blast from the Past: Goodbye May Seem Forever

It seems like it’s been a long time since I did a Blast from the Past.

This week’s edition is in charge of Walt Disney’s 1981 underrated classic, The Fox and the Hound, for being the saddest and cruelest Disney animated movie ever.

Coincidentally, I’ve been catching up on some of my reading… starting with Life of Pi [Trailer], which has an interesting bit on Animalus Anthropomorphicus — “the animal seen through human eyes.” — which happens to be animation’s (and movies’ in general) favorite way of seeing animals.

Of course, nature is cruel… it’s just the way things are, and The Fox and the Hound reminds us of that by the end, when we’re all almost accustomed to very adorable Copper and Tod, that these guys are natural enemies and thus cannot be together. Also, foxes are not pets as Widow Tweed had us learning…

The way critics received the movie back in its day only reaffirms that critics know nothing.

Having said that~ DUDE!

Leafie: A Hen into the Wild. Catch it at this year’s KOFFIA.

Beautiful animation, hardcore dramatic story. Watch out! I read there’s a version with the ending cut short because it’s too freaking depressing. LOL 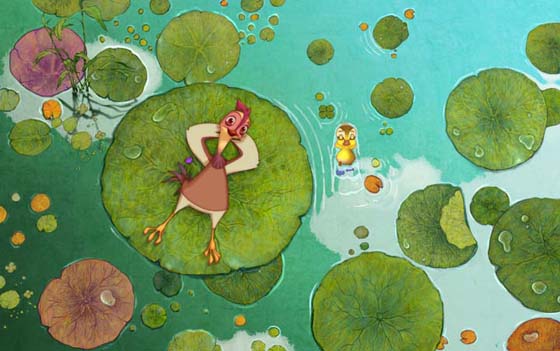 Farm hen, Leafie and adoptive duck-son Greenie chilling at the everglades on the 2011 Korean animated flick, Leafie: A Hen into the Wild.