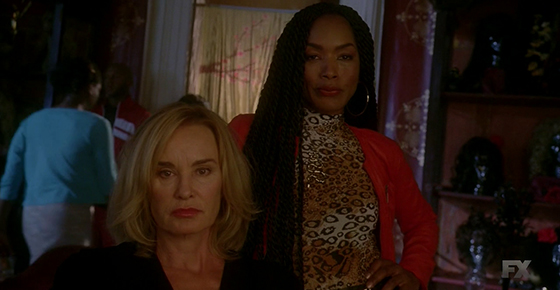 There’s something overwhelmingly satisfying of knowing you were right. I didn’t make many predictions last week, but there were a couple. More racism (check), reincarnation of the dead (check), and Fleetwood Mac’s Rhiannon (fucking check; I still can’t believe it and I’m a little disappointed Lily Rabe only sang a little and not in full-blown musical number format). I’m also impressed they managed to toss in another Stevie Nicks song, Edge of Seventeen, but that’s not too important. I can’t decide if the fact that I can predict Ryan Murphy’s every move for this show is terrifying or hilarious, but maybe it’s both, and that itself makes me go on watching American Horror Story Coven.

So here we are, two episodes in, with the surprisingly decent Boy Parts. As expected, Rabe’s witch-burnt-at-the-stake is alive and well, embracing her “holy” powers to save the creatures of God and taking down creepy white men who kill gators. Also, apparently, Cordelia has a husband and fertility issues, so you can probably bet there’s going to be some demonic child coming up this season. To shamelessly pull a line from Once Upon a Time, “Magic always comes with a price,” and I’m sure that Cordelia and her husband’s snake-filled sexual endeavor with black magic will result in something decidedly not good.

There’s a clear defining line to every single thing in this episode, or this season, or this show in its entirety, and that’s, “How can you be such a bitch?” Everyone’s a bitch, and I love it. The first episode was literally titled Bitchcraft, but the whole season should have really stuck with that instead of Coven. That’s really what the show does best. It shows you how much of a bitch so many of these women can be. Farmiga, Brewer, Rabe, and Paulson are still not exactly on the Witch Bitch Crew 2k13, but I fully expect them all to dive into the depths of brutality sooner or later.

Again, the show splits itself between the young and the old. Sidibe gets offered a little bit of back story for her character and some great one-liners, but it all seems a little pointless in the long run. The youth portion chooses instead to focus on the repercussions of Bitchcraft, which includes facing cops and apparently deciding to resurrect cute boys in as close to a Frankenstein manner as possible. I’m actually a little disappointed that no one bothered making the girls say, “Double, double, toil and trouble,” when attempting to bring Evan Peters to life, but I guess I’ll settle for shitty camerawork and a ridiculous ritual. Let’s just keep our fingers crossed he dies again quickly for the sake of keeping this show mostly limited to the ladies.

However much of the girls you get in this episode, it’s most definitely the older women of the bunch who deliver the best again. Paulson barely gets featured, with the above summary summing up her contribution well, but it’s all about the grand trio. You have Lange embracing the bitch full-on, lighting wigs on fire and threatening the girls with the glorious line, “The point is in this whole wide wicked world, the only thing you have to be afraid of is me.” Bassett has no time for the oppression of white women, locking them in boxes, killing their families, and giving them a bad hair day. If only we could have had more of Bassett and Lange bickering because there really was nothing better than watching them snap at each other.

And then there’s Bates, who I’m really hoping gets to actually shine a little more this season. Her rubbing the blood of slaves on her face was a highlight of insanity last episode, but she was almost too tame in this follow-up. It’s interesting enough to watch her adapt to the new world around her, but it’s not much, although I am particularly impressed at how little they’ve made it a point to make her freak about about modern world shit unlike what most time-shifted characters are usually subjected to. With any luck, we’ll have an immense confrontation between Bates, Bassett, and Lange because with two witches, two immortals, and a whole lot of pent-up anger, the shit is bound to hit the fan.

Again, nothing in American Horror Story Coven is actually scary, but it’s definitely sliding further into the camp. And, dare I say it, I actually sort of enjoyed this episode. Plenty of old horror tropes are still popping up and the special effects are still embarrassing (I don’t think I’ve ever seen a weaker throw against the wall than in this episode), but I’m digging the body horror and some big improvements to the make-up from last season. If anything, Boy Parts shows they’re learning just a little bit, and as predictable as it gets, this might actually be the first season worth watching.