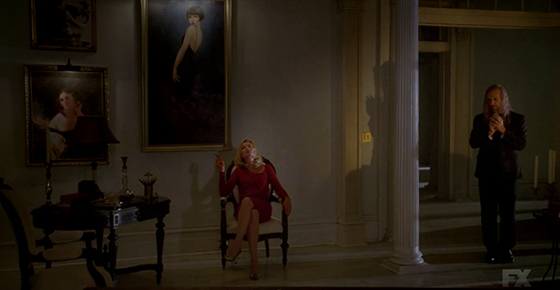 Ryan Murphy and Brad Falchuk must have listened in class when their teacher told them that history repeats itself. There’s so little surprise in this latest episode of American Horror Story that The Replacements really makes for a perfect title. Time and time again, they replace one thing with something that’s almost exactly the same, but different enough to be considered new. Predictability strikes constantly this episode, with sexual assault, murder, racism, and religious intolerance abounds! The same stuff that comes with every season of this series all wrapped up nicely in some burnt curtains.

My claims about Murphy/Falchuk relying on sexual assault to string a loose story together rang true from the very first episode, but this episode around we have to suffer through even more, and somehow it’s worse. First it was gang rape, now we have incestuous sexual abuse. Yep, you heard right. One of the main plots of this week’s episode focused on Evan Peters’ now-revived character (thanks to Misty and her good old necromancy; it’s a shame we only had one Stevie Nicks song, Sara, this round) being brought back to his mourning mother by Farmiga’s Zoe, who really manages to get stupider every episode. Turns out that his mother has been sexually abusing Kyle since before he was Frankenstein’s monster and now she’s pretty frustrated that he doesn’t respond to her molestation like he used to.

The only horror here is that more than one person thought that this would be an appropriate story to include in the series, existing only to further prove that Murphy and Falchuk only care to provoke the audience. It’s yet another empty introduction of a character who barely progresses the story and is disposed of within the span of one episode, something the writers have a knack for doing to fill time and pretend they have any idea what character development is. Where Peters once played the rapist, this time he plays the victim. The parallels that he raped Farmiga’s mother in Murder House and here Farmiga leads him back to the mother who has been sexually abusing him aren’t lost on anyone who has seen both of those seasons, but it doesn’t make it any less uncomfortable. Sure, the intention of the writers probably was to go for unsettling and shocking, but the way the show handles these subjects is just plain exploitative in the worst way.

To switch gears a bit, I think we really need to take a focus on the treatment of certain characters and actresses on the show. I’ve thrown around some praise for Gabourey Sidibe, but something really hit me this episode. Sidibe has barely anything to do on this show. Well, most of the supporting actresses don’t, but Sidibe’s writing so far especially disappoints. “Oh, but she’s funny because she’s saying the word ‘cracker’ at a racist!” Yeah. Okay. It’s funny the first time, amusing the second time, and maybe even still worth laughing at the third time, but then a disturbing notion starts settling in. The two men writing this series are the same men who have created some obscenely stereotypical women of color in the past.

I shouldn’t need to mention the parallels between the treatment of a plus size woman of color on Glee and now on American Horror Story because that’s certainly not getting any better. To quote Emma Roberts, “Ms Aryan Sisterhood came between Queenie and her food.” Clearly that’s the only reason Queenie would be mad about an immortal, racist, slave owner. Additionally, let’s not forget the (thankfully) short-lived The New Normal which featured Nene as nothing more than another Sassy Black Woman trope.

I’m not saying that white dudes shouldn’t write women of color – because plenty of them do it well – but I’m saying that racist white dudes like Ryan Murphy and Brad Falchuk should have probably had their asses beat down by every talented woman of color in this cast. And talented they are! Sidibe has proved herself already to be a wonderful TV personality on The Big C, and I’m fairly convinced all the hatred that Angela Bassett delivers weekly towards white people is her channeling all her anger towards Ryan Murphy into her role. Her playing Solitaire on an iPad seems like something they just threw in because she got tired of waiting for anything of interest to happen with her character.

Even though the women of color get some of the worst character progression, it seems like some of the other actresses are facing a pretty boring ride too. After being put through immense torture last season, Sarah Paulson just looks plain uncomfortable most of the time in Coven. Her fascinating little dream voodoo sequence was actually one of the best scenes in the episode though, almost as though Sam Raimi decided to provide his own sort of camp take of a voodoo sequence from Jacques Tourneur’s I Walked with a Zombie — two things that one might not ever think to compare this series to. Her lack of a story is mostly attributed to Jessica Lange being the center of attention, which brings us right back to the predictability of it all.

Jessica Lange and Emma Roberts are on full-on Witch Bitch mode this week, with one both realizing multiple things. Lange’s Fiona is still obsessed with age, so much so that it makes her approach the young Madison about her role as the next Supreme. In a closing scene that lazily parallels the opening scene (something that would have actually been better had they waited two or three episodes to execute), Lange kills the budding new Supreme just as she killed the former Supreme decades before. Anyone who wasn’t blind could take notice that Madison was the only witch who showed any potential to learn more than one magical ability, and the fact that her personality and looks meshed most with Fiona was a pretty clear tell of her being the next Supreme. Many were still surprised by this lame reveal though, which prompts the question: have you ever seen a single supernatural horror film? Roberts’ early death is a particularly big downer though, considering her bitchiness is one of the few redeeming qualities of the series. Sure it gave Lange an excuse to have fun with monologues, but at what price? The loss of one of the most entertaining characters on the show.

For some incredibly strange reason, the dutch angle use this week was amped up to an unholy proportion. The creative decisions for the camera in general were just batshit crazy and not in a hectic but fun way with something like The Name Game last season. One thirty-second shot of Lange in a bar was sideways for no good reason, only to be followed later by some of the most embarrassing fish-eye lens uses ever to be seen on television for a scene where the girls simply eat lunch. It’s like the show gets progressively less coherent visually, with the director wishing they could deliver something unsettling and failing constantly.

At this point in the series, I actually think Nan might be the only character I don’t hate. It’s likely that this is because her writing is so facile – existing only to present a “good” alternative to all the bad witchcraft around – that it allows her to circumvent my general anger towards the series. I also want to mention that I’m really starting to pity Denis O’Hare who literally has nothing to work with on this show. Go back to The Good Wife buddy. At least that show hands you great writing. Anyway, the worst part about American Horror Story: Coven so far isn’t everything that the show has presented up to this point, or even that people eat it up. It’s that an episode of television this fucking bad only makes me curious to see what else could follow.

Biggest Embarrassments of the Week: