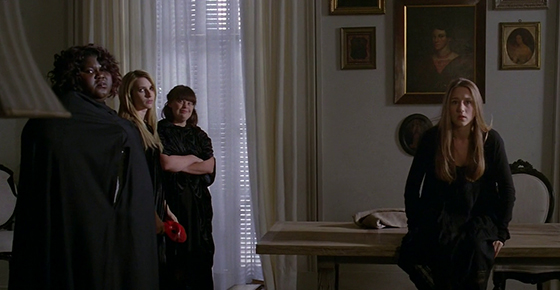 Another year, another season of American Horror Story. Ryan Murphy and Brad Falchuk hit us with the season of the witch this time around, dropping us smack into present day (with the occasional off-set period scene like back in Murder House (or the exact opposite of Asylum if it’s the only one you’ve seen)). Young Zoe Benson (Taissa Farmiga) has just killed her boyfriend by some freak accident while losing her virginity. It’s a laughable scene, but it’s American Horror Story – what isn’t laughable?

Turns out it’s witchcraft. “The blood, all that blood,” Zoe recites in the deadest voice physically possible on the way to her new boarding school. Is she down because she killed her boyfriend while fucking? Is she down because she’s moving to a new school? Or is it just Farmiga phoning it the hell in after realizing that she subjected herself to another season of writing that ends with everyone around her dying? We’ll have to wait and see, but I’d put my money on Farmiga just giving up.

Anyway, the girls at school aren’t exactly the friendlist bunch, with Gabourey Sidibe, Emma Roberts, and Jamie Brewer rounding out the small group of students nicely. To put it nicely, they’re bitches, hence the episode title Bitchcraft. Roberts has been a bitch at the top of her game before (see Scream 4) so one can only hope the show will take full advantage of that. Sadly, their introductory scene – in which they scare the wits out of Zoe while wearing some masks that even orgy guests from Eyes Wide Shut would be embarrassed to own – might as well be used in a lesson of how not to shoot a horror scene.

Time and time again, American Horror Story attempts to unsettle the audience by throwing in unnecessary oblique angles and messing with the editing as much as possible, which simply proves that episode director Alfonso Gomez-Rejon and the rest of the people that work on the series have no idea how to actually scare a human being. This kind of ineptitude is really a shame, considering such a simple “people lurking in the shadows” scene is easy enough to set up.

When it comes to a boarding school and witches, one doesn’t beg for Suspiria, but the cast and crew could probably benefit from watching a little Argento to improve the quality. Much unlike Suspiria however, here we have witches as both students and teachers, with the supremes (sans Diana Ross) ruling as the strongest witches. The adults are thankfully the talented duo of women who practically saved Asylum from being the biggest trainwreck ever: Sarah Paulson and Jessica Lange. The two, thankfully, know how to handle the batshit tales that the writers have in store for them and keep things rather tame.

Alas, Murphy and Falchuk love their shock factor, and boy do they go all out with it this time around. It takes absolutely no time at all for them to throw in a sexual assault, this time in the form of a gang rape. The inclusion of this scene and similar elements in their past projects (even back with Nip/Tuck) makes one wonder just how much these two men hate women. However much they like to dress American Horror Story up by having their women come off as “strong” at times, the show is overwhelmingly misogynistic, and the premiere of Coven only serves as another example of this continuing attitude. Good horror has reason for placing its characters (notably women) in the throes of danger, but much like the bad horror it is, the show ends up more exploitative than rational, and not in a good way. However, this is more so a criticism of the series as a whole than the season premiere alone.

At the very least Bitchcraft does give us a couple of things to look forward to throughout the season. It’ll be interesting to see how Lily Rabe, whose character is burnt at the stake the very moment after she shows up on screen even though she’s credited as part of the main cast, factors in, as she was definitely one of the best aspects of Asylum til her bitter end. This season is also thankfully proving to be a tad more camp from the very kick-off; Farmiga’s killer vagina, Lange’s succubus-style power, and Sidibe’s voodoo ability being only some of the magical highlights.

What could prove to be the season’s biggest asset is a rivalry building between Marie Laveau (Angela Bassett) and Madame Delphine LaLaurie (Kathy Bates), the latter actress of whom seems to be really enjoying just how batshit crazy her character is. The constant mention of slavery (not just in Bates and Bassett’s period set-up, but in the show’s modern setting as well) as well as the torture and mockery of a person of color within the first five minutes is hopefully not an indicator of how overwhelmingly racist the series could get, but only the rest of the season will show exactly how much Murphy and Falchuk have learned and how offensive they’re planning to get this time around.

If the premiere is any indicator, it shows they haven’t exactly grown past their need to string together death and sexual assault into a trite narrative. At the very least they’re embracing the camp factor of American Horror Story a little more, if only just enough to make the show a more addictive and ridiculous watch than former seasons. Fingers crossed we’ll get a musical number before the tenth episode this time around. I’ve got my hopes set on Fleetwood Mac’s Rhiannon.