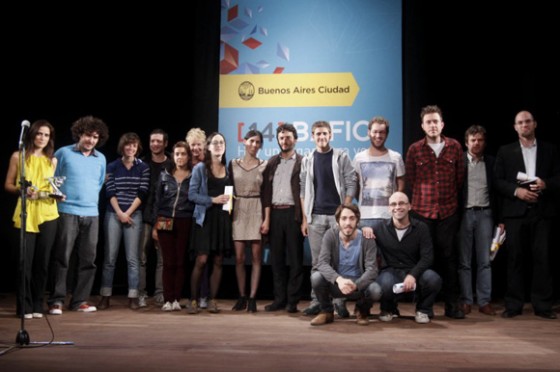 Winners at the 14th edition of the Buenos Aires International Independent Film Festival.

The opening film was an Argentinian film titled El Último Elvis (The Last Elvis), a debut by Armando Bo, officially selected to participate at the Sundance Film Festival 2012, holding its national premiere in BAFICI, and participating in the Buenos Aires Lab 2010 (BAL). I wondered about the reason behind their choosing this as their opening film, even if I believed that El Último Elvis was a wonderful film. Generally, the opening slot is given to a World Premiere, but they decided to break the rules. It was something worth doing.

As a first time participant at the Buenos Aires International Independent Film Festival, I noticed they presented various films from artistic ones to animation for children. I was surprised with their selection — it’s a little different from other big film festivals. For example, one of the most interesting sections was Space Odysseys – Cinema and Architecture. Some people commented that it was just the style of films in the vain of BAFICI. In it, they showed the space of some places, the buildings, etc. and, of course, showing us stories with specific meaning and expressions, which the festival organizers respect and encourage the authors by keeping this section.

It was then that I started looking at the word “Independent” in the festival name. So I asked myself the question, what would they like to be independent from? Independent from what you typically think — that is what I found after BAFICI.

Artistic director, Sergio Wolf, gave me the impression of what exactly the Buenos Aires International Independent Film Festival expected. At the launch of the official program, Wolf said that this year, BAFICI aimed to question “What is Cinema,” further adding that “BAFICI wants to preserve the future of cinema, and for us, the debuts are a large part of the future, so 50% of the films in the national competition are first-time directors.″ That’s why some films felt a little bit rough and amateurish — they were their first films and first screenings. However, these films kept vivid emotions like they really were alive on the screen.

Wolf also emphasized that this year’s festival had increased the number of World Premieres — in the international competition, they have six world premieres. All of these films were full of passion and had the strong will to deliver their messages.

During the first weekend, it was hard to get tickets; the main venue there was full of people talking about the films, especially about Dromómanos by rising local star director Luis Ortega, La Chica del Sur by Best Documentary Director in BAFICI ’05, José Luis García, Los Salvajes by Alejandro Fadel, and other new films by local directors. Personally, as a Korean, I was happy to hear about the good reactions for Hong Sang-Soo’s film, The Day He Arrives (북촌 방향).

Like the films, the festival fever is also really hot with events such as the A Little Night Music concerts, conferences and seminars of the film industry, or Outdoors BAFICI for special free screenings in the park.

For foreigners and professionals, BAFICI is one of the most important film festivals in South America, but for Bonaerenses, they take BAFICI not just as a film festival, but a picnic to the cinema and to the park with family or friends. Hopefully, next year I will get used to BAFICI’s style to, then, finally enjoy the festival like a picnic!